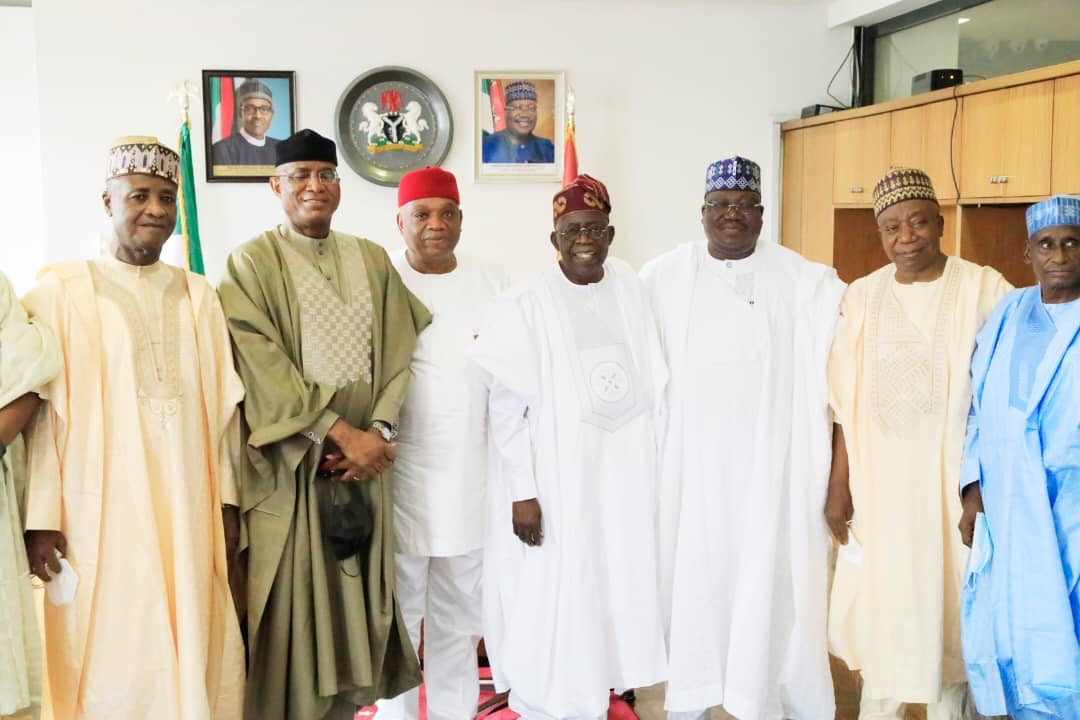 Former Lagos State Governor and national leader of the All Progressives Congress (APC) has appealed to the party’s senators to support his presidential ambition.
At a crowded meeting with about 30 APC caucus in the Senate,

Tinubu who took time to narrate his ordeals in the fight for democracy, made it clear that his visit was to seek support and partnership of the lawmakers for the realisation of his presidential ambition in 2023.
He asked them to back his ambition based on his capacity and experience.

He said, “Why am I here? I came for your counsel, partnership and support. Nigeria has come to that stage where we need a change of baton. Mr President is rounding up his second term.

“Election is coming up in February. We have various programmes that I don’t have to restate here; nomination process, primary process and all of that.
“I can’t do it by myself and I can’t do it by sitting at home, expecting that many personal friends that I have here will do it for me. I believe jointly, we can do it. You can back me successfully for the nomination of my lifetime ambition.

“If the counsel of wise men is anything to go by, ‘if you want to go fast, do it alone, but if you want to get there successfully, definitely, go with a team’. I’m asking for that teamsmanhip here today. Get me over the hump of the nomination process  and from that, get me to the presidency of the Federal Republic of Nigeria.

“I want to beg you to look at my capacity and experience. I’m just an unusual candidate in the period. I’m perhaps the only one who had been in the Senate, had been governor and is aspiring to become president.

“By pushing me over hump when you support me vigorously, you have created a greater power that will pave the way for Nigeria’s progress.

He told the Senators that despite of cases of being stabbed at the back, his belief in God will see him through in his presidential ambition.

Without mincing words, the former Lagos governor said his ambition is not blind to push to step on the toes of President Muhammadu Buhari.

He however, made it clear that he intends to step in to the shoes of the President in 2023.

He also appreciated efforts of the Ahmed Lawan led Senate in promoting unity and peace through its legislations.
Reminding the Senate of the lessons in the first stanza of Nigeria’s first National Anthem, Tinubu charged the Senate to continue to legislate in support of the country’s stability and unity.
He told lawmakers that personal sacrifice, selflessness was part of his principles which aided the formation and survival of the APC.
He cited the example of when he was asked to list what he wanted politically and he declined and insisted that he was satisfied with the success recorded in the merger.

“You did it recently there was a bill before you that wants alteration. I watched you sitting as President, I saw the gavel in the hands of the Senate president, he puts the question, the Nay was quiet yes was loudest and he explained.

“That is courage, that is the courage that the nation needs. The Senate president I will continue to respect you the rest of my life.”

“The senate President, you have shown unusual leadership since you assumed the leadership of this senate

You have navigated the mine field in the effort of putting our country together unity in diversity. How I wish you use that unity and diversity for our prosperity

“It is crucially important that you do your job in the atmosphere of no intimidation or bully. You have been doing that. You are careful as a team leader to build a very successful team that is navigating this country very well in the right direction

“Democracy does not thrive when both arms of the Government are not in tandem with the spirit of nationalism development and fairness to all.

“You represent various constituencies. I know how fast you want Nigeria to grow economically but I know the hurdles on our way.

“I know with adequate communication, effective strategy the assembly will work and the only way we can progress and make a better Nigeria. “We owe it to ourselves, we owe it to the next generation, we owe it to our children to be able to fashion a new order, think out of the box, be sincerely committed to our unity, unity in diversity, prosperity, for growth and emancipation of many Nigerians.”

“In democratic governance our party APC was united in 2015, I was a very active part of the merger

“When the constitution of APC was being written they called me to ask what do I wanted,  I said I have given it all, I will be satisfied with anything you call me or any name you assign to me as long as this merger is successful I have a prospect, I have a future and I have an opportunity to excel  “Somebody ran to me telling me they say you are the party leader but that party leadership is not defined yet, that I should intervene. I said I have not seen anything to intervene. Leave them to do their job.

“I was with President Muhammadu Buhari and he is somebody who gives you a job without interfering so I did not go to intervene.

He said he called audience adding that he was grateful to lawan and the senators for the honor.

“My background is in accountancy and finance,  that is what I went to the university for, Chicago State University I was a distinguished scholar, I won many awards and I graduated with honours. I was recruited by the five of the big eight accounting firms , they offered me a job.

“I was exposed to may of big companies and corporate organization’s I was exposed, I was well trained and when I said it was time for me to go back o my country Moble transferred me, I came home,

“Don’t be surprised about the opposition and the lessons of life that you will learn as in this our journey of democracy together.

“Don’t worry about people stabbing you in the back, people running you into stumbling blocks, believing God, determination, consistency and perseverance will pull you through I will pull off through.”

On the women interest that were thrown out during the debate on the constitutional review for which the women blocked the national assembly gate, he said,

“I ran into a little ambush of women protesters but of course I went to the other gate interestingly affirmative action is good but you are being very careful not to jeopardize the constitution.

Responding, President of the Senate Ahmad Lawan said that the APC Senate Caucus was a central and fundamental pillar of the party.

“This caucus has remained committed to the party, shown resolve to our manifesto to work within us and the Executive.

We have achieved so much because of the APC caucus.
“From 2019 that this caucus showed loyalty, commitment and purposeful orientation to ensure that our victory from 2015 and 2019 as a political party are fully utilised for the benefits of Nigerians.
“This party needs the kind of commitment that APC members have shown in the country.
“APC must continue to be progressive in our actions. 2023 is going to be a year for APC again. By Feb. 25 when the Presidential Election will take place, by the grace of God, APC will have the victory that is required.”

On the leadership crisis in the party, Lawan said that “Recently we have had difficulty because of misunderstanding between some of our members and the party had been thrown into a temporary confusion.

“I thank God it is over now. It is very clear that our party is back on tract that in the next two weeks, our national convention will hold and a new set of leaders will emerge.”

Lawan thereafter wished Tinubu well and success in “this enterprise” and the recognition you have given to the APC Senate Caucus is well appreciated.

“All of us wish you well, wish you success in this and in the affairs of fighting for APC to continue to be the ruling party, Nigeria justifiably so, your excellency, we are with you.
Former senators on his entourage included Adadayo Adeyeye (Ekiti), Abu Ibrahim (Katsina) and Iyola Omisore (Sound)