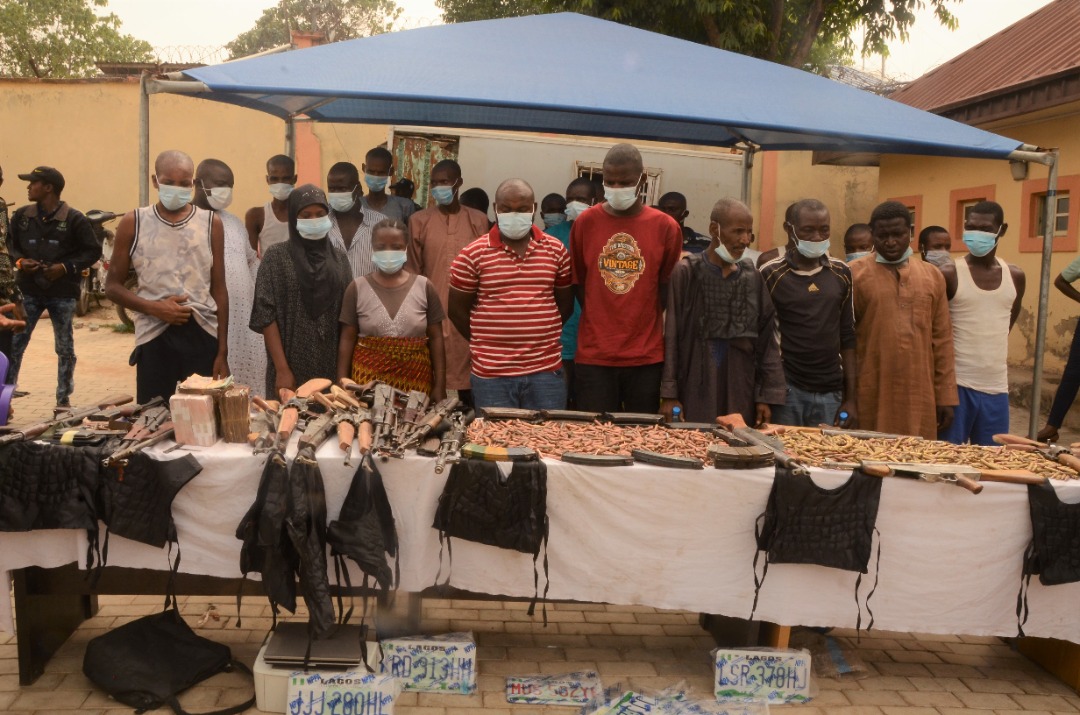 According to him, notable amongst the cases is the arrest of one Ahmed Yunusa, aka “Yellow Ashana”, a 36-year-old leader of a vicious bandit group that has been terrorising communities and road users along the Abuja-Kaduna expressway.

“The suspect who has been on the run following a police operation that led to the death of a member of his syndicate, one Yellow Magaji aka Arushe, was arrested during a sting operation by police operatives of the FIB-STS.

“The suspect confessed that he led the syndicate which has carried out several kidnapping operations on the Abuja-Kaduna expressway, and launched three different attacks on Kadara Community in Kaduna State, wherein scores of persons were killed. “He equally confessed to the kidnap and murder of one Hafsat Isah, who was lured into the bandit camp by her friend, one Ladi Sale that was equally arrested by the police.
Also arrested Adejobi said was one Mrs Nvou Michael, a 37-year-old female from Vom LGA, Plateau State, who was intercepted by operatives along Samminaka/Jos expressway, Kaduna State, in possession of 15 locally made rifles and 400 rounds of 7.62 x 39mm AK47 ammunition in a Toyota Hummer bus travelling from Jos, Plateau State to Kaduna State.
“Investigations revealed the suspect was an arms smuggler for some bandit groups in Kaduna State. Similarly, Police operatives arrested one Nuhu Yakubu, a 33-year-old male from Donga, Taraba State, while he was conveying 1,500 AK47 ammunition from Wukari to bandits in the Donga Forest.
“The operatives of the FIB-STS equally apprehended the duo of Idris Abdulwahab, 26-year-old, and Adams Ibrahim, 37-year-old, both from Okene, Kogi State, who have been linked to major bank robbery operations at Ondo State, and in Egbe, Yagba West Local Government Area of Kogi State, in 2021, where they killed a security guard.
“The suspects who specialize in the use of improvised explosive devices (IEDs) to forcefully gain access into banks for their robbery operations, were intercepted by eagle-eyed police operatives at a check point in Isonu, Kogi State, while heading to Okene from their forest hideout, with a cash sum of one million, eight hundred and eighty thousand Naira (N1,880,000).
The Inspector-General of Police, IGP Usman Alkali Baba while commenting on the successes recorded charged Police Operatives across the country to sustain the tempo in the fight to curb violent crimes in the country.

Adejobi quoted the IGP to have lauded the results of efforts emplaced to roll back the negative trend of crimes.
He also commended t
While assuring the nation that the Force would continue to close-up on the criminal elements who pose a threat to national security, the IGP called on well-meaning members of the public to readily assist the police with information to effectively combat the purveyors of violent crimes in the society.
All the suspects he said will be arraigned in court upon conclusion of investigations.