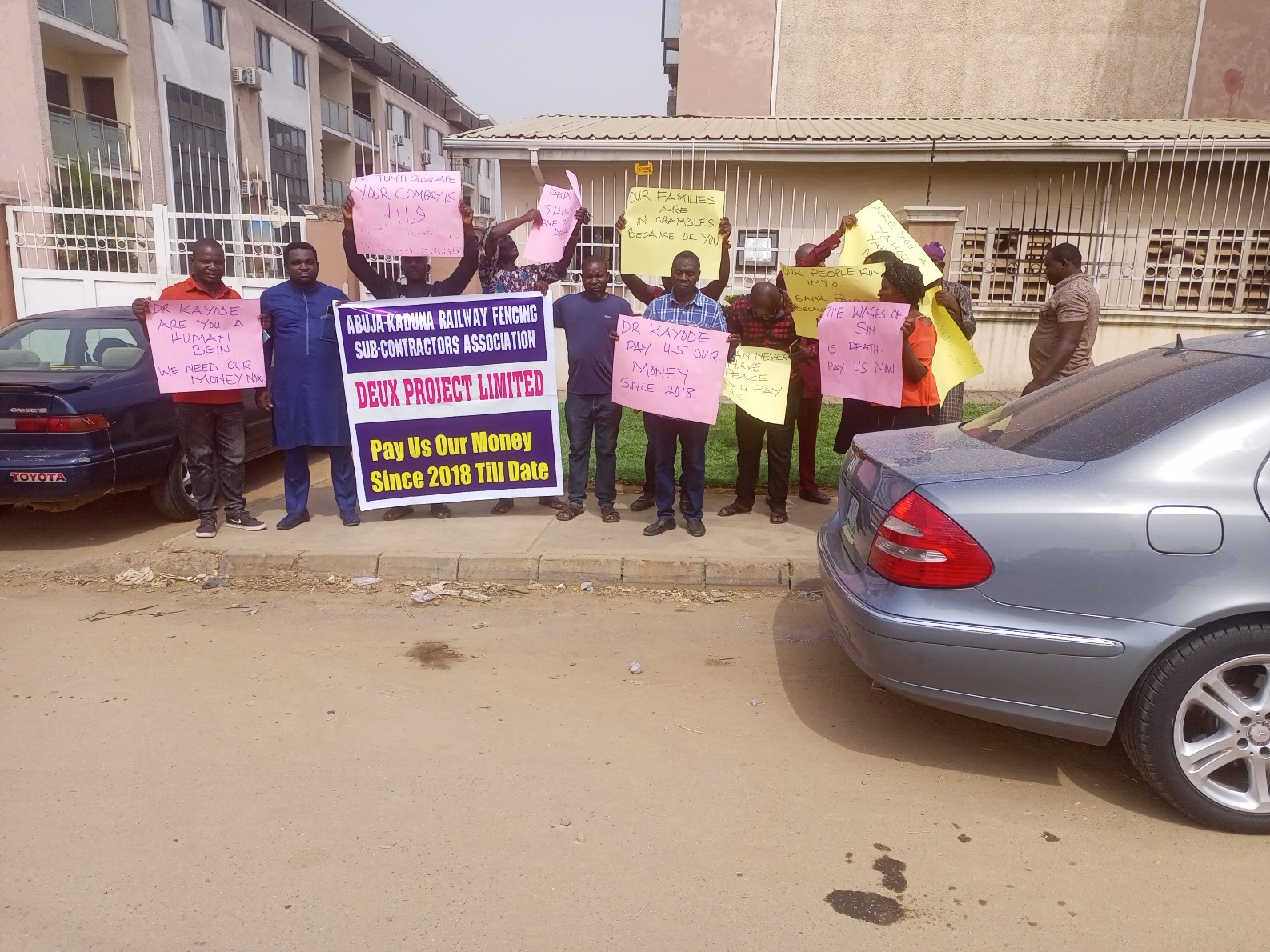 Contractors who were engaged to fence Nigeria Railway line from the Federal Capital Territory to Kaduna have protested alleged diversion of N600 million meant to offset their outstanding payments over the weekend.
The contractors who executed various projects from 2017 till date have not been paid for the projects they executed, a situation, they lamented has got them indebted to banks with interest accruing on daily basis.

The angry contractors numbering about 30 explained that they acted as subcontractors to the major company called Deux Projects Limited owned by one Dr. Tunji Olowolafe whom they were relating well with, when the projects were being exevuteduntil the situation went awry after the Federal government paid the CECC, a Chinese Construction company which later paid Deux Projects Limited with the view to pay subcontractors.

The protesting contractors speaking through their leader, Mr Onyekene Chukwu said they have been agitating for the debts owed them without success noting that the Chairman of Deux Projects Limited who is their debtor is an ally of “powers that be” in government circles particularly in the Federal Ministry of Transportation.
Mr Chukwu said: “We worked on Abuja Kaduna railway Deux projects Limited since 2017, 2018, some 2019 and since then till now we are not being paid.

“The other day they called us and their team of engineers did valuation. Almost all of us were captured in the valuation and the Kilometers that we worked were captured. Since they have been turning us up and down, come today, tomorrow and so on.

“We have been coming, we came last week, some from Lagos, Delta, Onitsha, many have died, others are bankrupt.
He said many contractors sold their properties like cars, land to execute the projects only to be deceived.
The worse part he said they worked under most precarious situation as they were probed to being kidnapped adding that after all the sacrifices their paymasters are engaging in hide and seek

The contractors who confirmed to newsmen that the Federal Government has discharged it’s obligations by releasing funds meant for the railway, called on President Muhammadu Buhari and the Economic and Financial Crimes Commission (EFCC) to wade in, stressing that Dr Olowolafe who is the promoter of Deux Projects Limited might have been fronting the business for some powerful personalities in government and has no single asset in Nigeria, hence, he could travel out of the country any moment.

“Now we want President Muhammadu Buhari to dig in and know the source of this project and those behind the project to know why we have done the job since 2019 and we are yet to be paid. They have been paid and yet they refused to pay.
“The main contractors are the chisels CCECC they gave this fencing project to Deus Project limited and Deus Project limited subletted to the local contractors
“They gave the contract to Deux Project Limited who subletted it to us under their supervision

“Over N600 million is what they are owing them what they are owing the local contractors. They have collected a lot of money from the Chinese who got the original contract from the Federal Government .
“Instead of them to pay they decided to divert that money to other projects they have elsewhere. Some came from Lagos, from Delta State.
Each contractor related their bitter experiences on the project site amid kidnappings and attacks by bandits, noting that it most painful and undermining of the President Muhammadu Buhari administration.

In his words, Mr. Raymond Agama a contractor said: “I worked with three different companies as a sub contractor Ascot Consult Nigeria Limited.

“Ascot has been working with them since 2017 and it has done production of blocks, casting and also supply and distribution of coping and laying. What they are owing Ascot is N57 million, it is more than that but that is what their paper says, but let the N57m come out first then we can go back and fight for the balance. I work for DSP as a sub contractor.

“I laid blocks in several kilometers . I work with Rock ways, I did concrete about 5.5km which amounts to about N30.8m, he said he worked with another subcontractor where they are owing him N19.6m. They came with an excuse in 2020 that the main contractor under whom we worked has been over paid.”

Effort to get the reaction of Dr. Tunji Olowolafe whom they accused to have allegedly diverted the money proved abortive as he did not pick his calls neither did he reply to a text message to his phone number 08035605656.