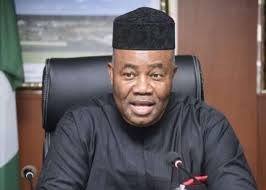 The Senate through its Committee on Ethics, Privileges and Public Petitions, has threatened to issue warrant of arrest against the Minister of Niger Delta Affairs, Senator Godswill Akpabio and the Sole Administrator of Niger Delta Development Commission (NDDC) Mr Effiong Okon Akwa over non – payment of N2.2billion Contract .
The duo according to the Chairman of the committee Senator Ayo Akinyelure (PDP Ondo Central), must appear before the Committee unfailingly on April 12, 2022 by 2pm.
Failure to comply, he said the senate may have no option but to issue a warrant of arrest against the duo having failed to honour the committee’s summons in the past.
Senator Akinyelure who briefed the press on the summons, said the committee had written several letters of invitation to Akpabio and NDDC Sole Administrator on petitions against them without any response from them let alone honouring the invitation.

“It shouldn’t be business as usual, Akpabio and the NDDC Sole Administrator must appear before the Ethics, Privileges and Public Petitions Committee failure of which will lead to issuance of Warrant of Arrest on them.

“The Committee wants to believe that as far as the Minister of Niger Delta Affairs is concerned, break down in communication must have caused his non – appearance before the Committee because as a Senator, he should know the implication of that.
“This press briefing is being done to solve the perceived communication breakdown between the Committee and his office. If our letters are not delivered to him, he will read and hear about the invitation in the media.” he said .
The summon he explained, is hinged on petitions filed against Akpabio and NDDC Administrator by Akom Survey Services Limited over alleged non – payment of fees for Survey carried out in the Nine Niger Delta States based on N2.2billion contractual agreement with the NDDC .
He said the petitioners totalling seven different companies, lamented in their petitions that non – payment for the services rendered, is pushing them into insolvency arising from unbearable Interests on loans secured from the banks.
“Aside the N2.2billion contract yet to be paid to the seven companies by NDDC, there is an outstanding of N6.25billion contracts yet to be paid to affected companies and N2.5billion job racketeering scandal.

“Petitions on all these against the NDDC and by extension, the Ministry of Niger Delta Affairs , are before the Committee which must be thoroughly investigated as mandated by the Senate. “he added.