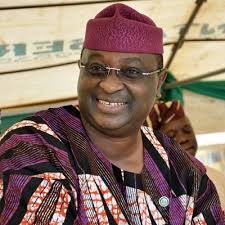 The senator representing Ogun west has commended the 9th senate for the passage of a bill to alter the provision for change of name of the area referred to as ‘Egbado’ to ‘Yewa’ in Ogun State.

This is as it is contained in part 1 section 3 (1) of the Constitution of the Federal Republic of Nigeria 1999 (As Amended) by the Constitution Review and Amendment Committee of the National Assembly.

The bill which was passed on Tuesday by the Senate witnessed a voting pattern where 93 Senators out of the 95 Senators present in the red Chamber voted in favour of the important Bill sponsored by Distinguished Senator Tolu Odebiyi.
Titled, “The Bill for an Act to alter the provisions of the Constitution of the Federal Republic of Nigeria, 1999 CAP C23 LFN 2004, to make provision for change of name of the area referred to as ‘Egbado’ to ‘Yewa’ in Ogun State as contained in the First Schedule of the Constitution of the Federal Republic of Nigeria, 1999 (as Amended) 2020 (SB. 357) was sponsored by Senator Tolu Odebiyi.
It was read for the second time on the floor of the Senate on Tuesday, 17th March, 2020, is as a result of collective efforts of traditional leaders and other leaders of thought from Ogun West Senatorial District.

Sen. Odebiyi had explained that while the factor of name is, no doubt, rooted in historical traditions which the ‘Egbado’ people of Ogun West Senatorial District have consistently demanded to be addressed as ‘Yewa’.

The sponsor of the Bill who is also the Vice Chairman, Senate Committee on Federal Capital Territory (FCT) and Marine Transport is particularly excited that the consistent yearnings of youths, political and religious leaders to have the name ‘Egbado’ changed to ‘Yewa’ has yielded positive results during his time as the Senator representing the good people of Ogun West Senatorial District of Ogun State.

The Bill was first read on the floor of the Senate on Wednesday, 4th March, 2020.