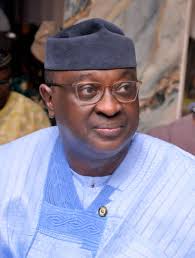 The senator representing Ogun west senatortorial district, Tolu Odebiyi has expressed regret that  the bills relating to women emancipation failed to make passage on Tuesday.
He expressed the same feeling with the failure of the bill that would have given some constitutional role to traditional rulers.
Senate on Tuesday went against it’s earlier resolve to adopted a constitutional review that will actualize the 35% affirmative action for women.

Without recourse to the recent visit of the wife of the President Aisha Buhari to drum support for women inclusion, and the visit of the wife of the vice President Mrs Dolapo Osinbajo, the lawmakers rejected two bills proposed to empower and to attach special recognition to women in Nigeria.
Expressing regret that the bills were rejected Odebiyi said, “It is quite unfortunate that the bills on women didn’t pass. I know that the First Lady came here to push for the approval of those bills on women.
“I also know that the wife of the vice president was also in the chambers on Tuesday. Everybody voted his or her conscience, they vote the way they felt.
“The senate is not monolithic. It is unfortunate it happened the way it did. I really wish we have more women representation in government in all aspects.
He said they would definitely have added values to what is being done in government if they are also involved.
“I think as we develop in the society, we would realise this and do the thing that would make us do better in government.”
On the traditional rulers he said, ‘I was surprised certain bills like giving roles to traditional rulers didn’t pass because it would have taken governance to the grassroots.

According to him, monarchs are the closest to the people. “I always believe that they are the eyes and ears of government in their communities.
“They can gather intelligence that could help tackle insecurity at the local levels I don’t know why it was voted against but sometimes you can’t really understand why people do certain things. Anyway we are in.
However he acknowledged the fact that it is democracy adding that the majority would always have their way.
“We are hopeful that amendments would come again and we would do the needful and make kings play constitution roles to tackle insecurity.”
Odebiyi commended the 9th senate for the passage of a bill to alter the provision for change of name of the area referred to as ‘Egbado’  to ‘Yewa’ in Ogun State.
He congratulated the people of Yewa who have been yearning for the name change over the years.
“You can imagine a situation where their identity  did not reflect  who they really are. This is a victory for all the leaders that worked for the process. I pray that the president will sign it to law.
“My people are happy now that they are being called what they are in the constitution of Nigeria. It is very significant psychologically and it is a pride to showcase who they are.
“We had identity crisis over the years based on the provisions in the constitution. We we are not Egba.
“We are Yewa but they refer to us as Egba in the riverine areas because they don’t know how to define us.
“We were victims of misplaced identity. The name Yewa was gazetted by the Ogun State government in 1979 but had yet to be reflected in the Nigeria’s constitution.