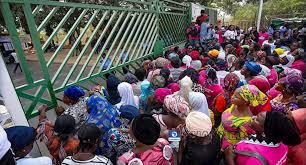 To protest the rejection of women-related bills during constitution amendment session last week the Nigeria Governors Wives Forum on Tuesday marched to the National Assembly complex.

Federal lawmakers, on March 1, voted against a bill seeking to provide special legislative seats for women.
They also rejected bills to provide 35 percent of political party leadership for women and “reserve quota” for women on appointments.
Also rejected was a provision to give a woman the right to become indigenes of their husband’s state after five years of marriage.
The governors’ wives, led by their chairperson and wife of Ekiti State governor, Bisi Fayemi, joined hundreds of  Nigerian women who had been converging at the parliament complex since last week to demonstrate against the lawmakers’ decision
Mrs Fayemi was accompanied by her counterparts from Edo and Akwa Ibom states, Betsy Obaseki and
Martha Udom respectively.
Addressing the gathering, Mrs Fayemi said by rejecting the gender bills, the National Assembly has rejected the progress of Nigerian women.
The governors’ wives, she said, demanded that the lawmakers rescinded their decision on the bills.
“This country belongs to all of us. 50 per cent of the country’s population is women. No women, no nation. We therefore demand that our rights be recognized; our rights as full citizen, to take leadership positions, not to die in child birth, not to live in poverty, not to suffer from gender-based violence.
“We want our leaders in this building whom we campaigned and voted for, to recognise that Nigerian women’s lives matter. Anything less than that is totally unacceptable,” Mrs Fayemi said