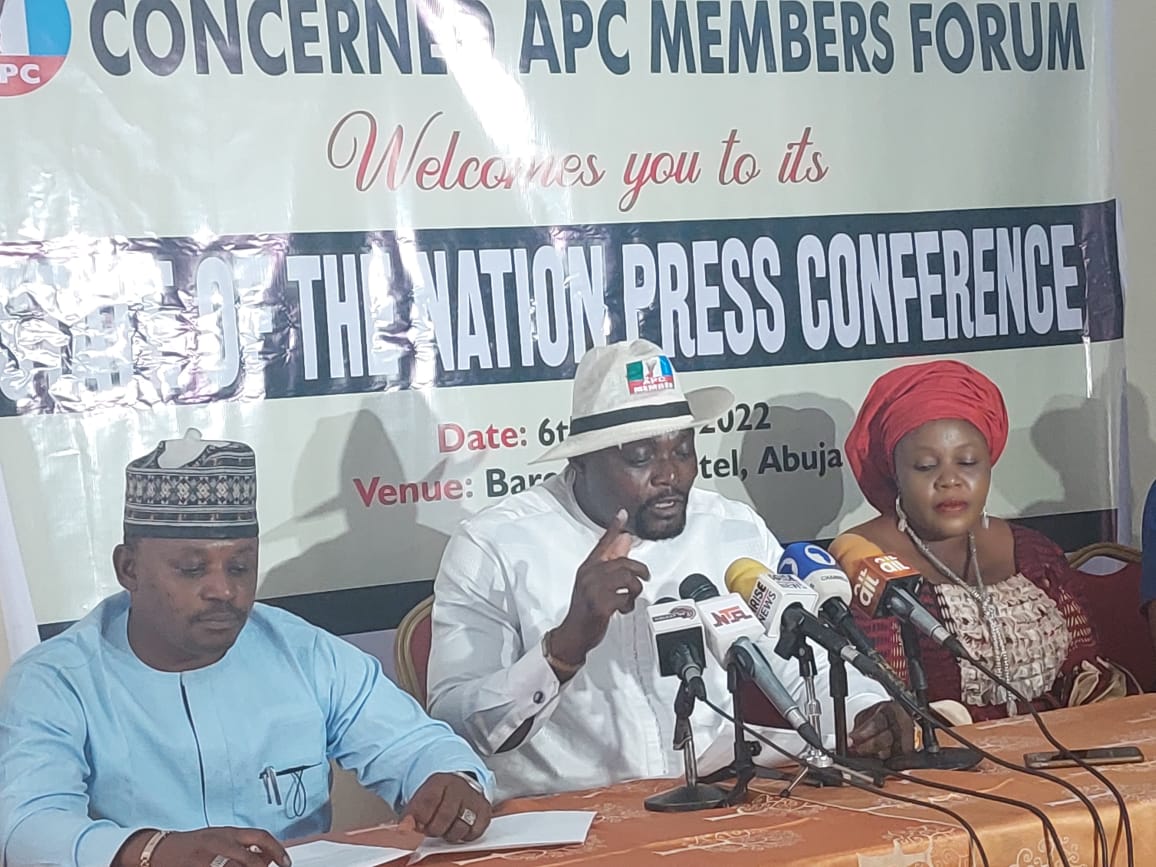 A registered forum of the ruling All Progressives Congress (APC) on the platform of Concerned APC Members Forum, has accused opposition Governors of the Peoples Democratic Party (PDP) of criticising President Muhammadu Buhari and Central Bank of Nigeria’s Governor, Dr. Godwin Emefiele, during the day but secretly currying favour at night.

The forum categorically told the opposition PDP governors to forget the dreams of coming back to govern Nigeria at center.

The forum was reacting to a statement credited to the PDP governors forum asking the CBN governor Emefiele to resign.

Addressing a press conference Wednesday in Abuja, Convener of the Concerned APC Members Forum, Comrade Okpokwu Ogenyi, called on President Muhammadu Buhari and the CBN governor Emefiele not to be distracted by “the falsehood of some governors who could not pay salaries of their workers and pension of retirees.

“The CBN Governor should concentrate on his monetary policy to stabilise the economy. We are convinced that, Mr. Emeifele will leave the bank better than he met it.”

Ogenyi said: “Fews day ago, we read on the pages of news papers and watched on National Televisions how some groups claimed responsibility for the campaign posters and branded vehicles of Mr. Emeifele 2023 Presidential bid. Some of the groups which claimed responsibility are Green Alliance Movement, Emefiele Solidarity Vanguard, Arewa Alliance, Emefiele Support Group and Unified Northern Nigeria Forum. While Green Alliance Movement claimed responsibility for the branded vehicles, the Emefiele Solidarity Vanguard insisted that, it would continue the agitation until the CBN Governor accept or reject the offer by Nigerians to run as President in 2023. The groups distance the CBN Governor from the campaign materials and even went further to say that, the CBN Governor is not directly link to those materials.

“It is more worrisome that after the open confession by these groups, the PDP Governors still accused Mr. Emeifele of funding his 2023 Presidential campaign with public funds, all in a bid to smear the image of President Muhammadu Buhari’s administration at a time the Nation is battling with insecurity. The PDP Governors should be supporting the president by providing solutions to our collective problem instead of generating tension.

“The statement by the PDP Governors is malicious, baseless and unfounded. This is not the process to unseat a government in power, and definately, PDP Governors recent lies and fiction can’t unseat APC government. Moreso, Nigerians are tired of the PDP and may never wish to return it to power in the nearest future.”

While calling on Nigerians to ignore the PDP governors, the APC forum said: “Let it be known that the Central Bank of Nigeria is working very hard on revamping the economy. The Buhari administration took over government when the Country was in economic recession, the same Emefiele has survived the economy throughout the period of economic recession, he brought Nigeria to the best and strongest economy in Africa.

“The PDP Governors are yet to openly commend President Muhammadu Buhari for this achievement, and to make it clearer, most of these double standard governors only criticize the President and CBN Governor in the day, they secretly go back to curry one favour or the other in the night.

“Ordinarily, the PDP governors should commend the Buhari’s administration for reviving the economy from where PDP almost killed it, instead, the Governors shamefully abandoned their respective responsibilities to falsely criticise a working system that has restored dignity to the Country before the international community.”