Consensus candidate will not help Nigeria, only a person with capacity to solve problems – Peter Obi 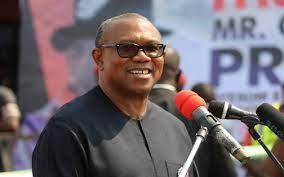 Former Governor of Anambra State and Peoples Democratic Party’s (PDP) presidential aspirant Peter Obi, has challenged the country in its quest for the next president to look out for a person with the capacity to solve problems bedeviling the country rather than consensus candidates.
Obi spoke on Tuesday while addressing news men in Abakaliki, Ebonyi State.
According to him, there atis no time,
“Nigerians want a person who will start solving the myriad of problems facing the country.
“They want someone who will secure lives and property; make the country productive; pull the citizens out of poverty, among other capabilities.
“This is not an issue of delegates because those with large numbers of delegates are still affected by the nation’s problems,’’ he said.
He added that the issue of consensus candidate isn’t necessary at this time in the nation’s political history adding that the geo-political zone of any aspirant isn’t what matters at this time.
“It is important to consider where people come from in a diverse country such as ours for equity’s sake.
“The country, however, needs someone now who will start creating wealth to make the economy viable.
“I can fix this country having a record of being a trader, of operating in the corporate world, and being a governor among other antecedents,’’ he added.