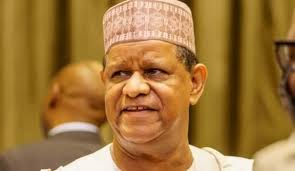 **Describes them as faceless

A presidential aspirant on the platform of the Peoples Democratic Party (PDP) Mr. Mohammed Hayatu-Deen, has taken a swipe at the Northern PDP elders who shortlisted former Senate President, Bukola Saraki and governor of Bauchi state, Bala Mohammed as northern consensus candidates for the PDP.
Hayatu-Deen who is former Managing Director of the now-defunct FSB International Bank, said the evaluation criteria of the committee constituted by Prof. Ango Abdullahi was totally subjective.
This was contained in a statement by the
Director-General, Mohammed Hayatu-Deen Campaign Organization, Lamis Shehu Dikko and made available to the National Update in Abuja on Saturday.

The statement reads in part, “The committee constituted by Prof. Ango Abdullahi is completely faceless and the evaluation criteria is totally subjective.

“It seems to us that this entire charade was designed to achieve a preconceived outcome.

“The focus of our candidate, Mohammed Hayatu-Deen, is to prove to our great party and Nigerians in general that he is the best man for the job, as we proceed towards a truly democratic process at the PDP primaries.

“We believe that the lack of consensus amongst the Prof. Ango Abdullahi-led effort and the politicking of other candidates should not jeopardize the electoral success of the PDP or threaten the peace and prosperity of Nigeria.”

He said, the campaign team of Mohammed Hayatu-deen and its principal were aware of the decision by the Prof. Ango Abdullahi-led committee to announce Governor Bala Mohammad and Senator Bukola Saraki as the preferred Northern consensus candidates for the PDP.

“After this announcement, we consulted with the Northern Elders’ Forum and agreed that the campaign of Mohammed Hayatu-Deen will now be undertaken independently to maintain the sanctity and integrity of the Peoples Democratic Party.

“For the record, we would like to state that the process of arriving at a consensus candidate had collapsed.
“The candidates involved could not reach a compromise amongst themselves, resulting in the decision of our principal, Mohammed Hayatu-Deen, and Governor Aminu Tambuwal to discontinue the process.

“The announcement we witnessed yesterday was not based on the principles of equity and transparency, which we believe should lead the country and the party into the future.”

Dikko said his principal
Mohammed Hayatu-Deen is a business professional with years of experience leading successful organizations that have provided jobs and opportunities for millions of Nigerians.
“He is a man who understands the pains and sufferings of the average Nigerian and has a plan to return our great nation to prosperity.

“Mohammed Hayatu-Deen wants to build a Nigeria that works for everybody. He is the best candidate for the office of the President of the Federal Republic of Nigeria.”