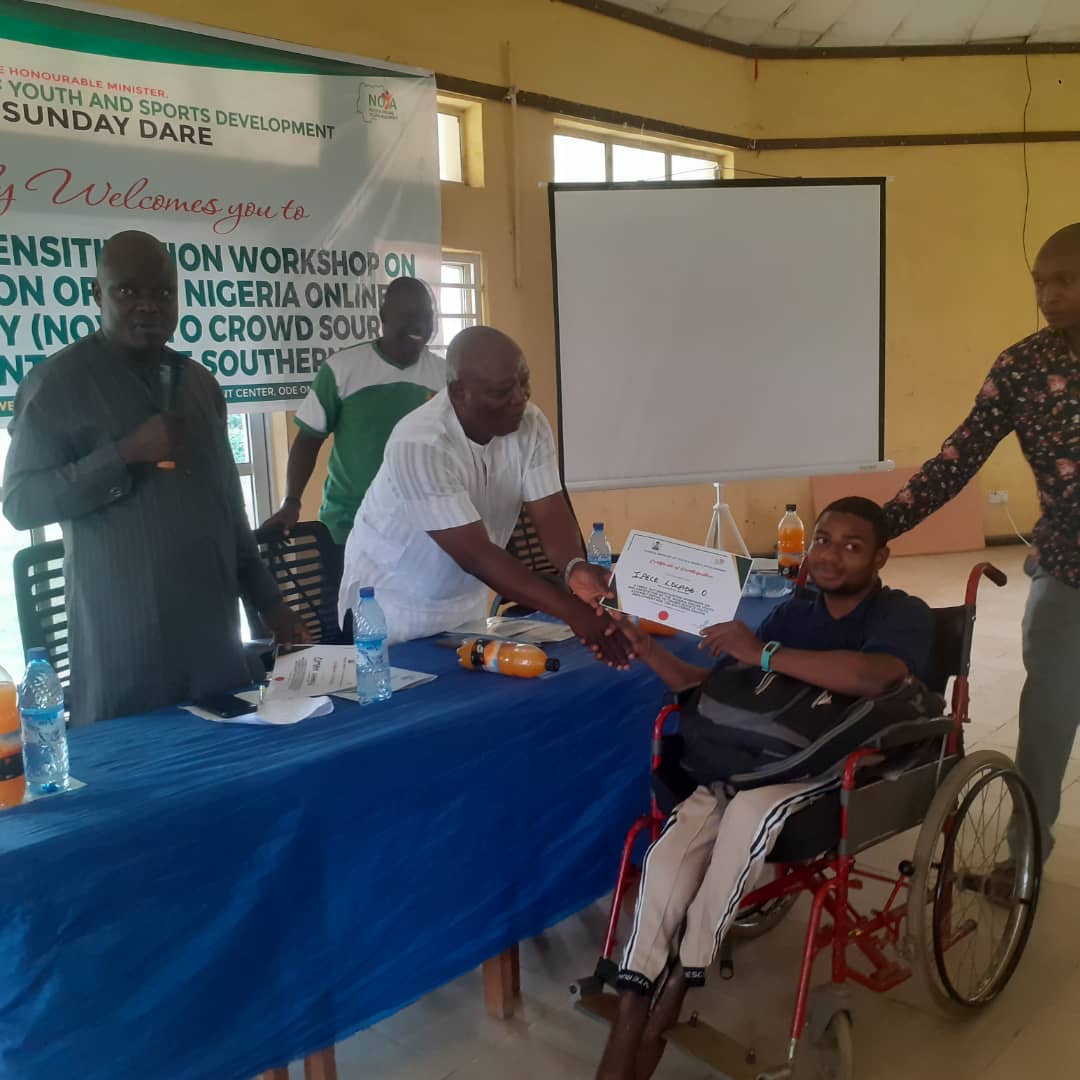 The Federal Government has set up an online youth initiative code named the Nigeria Youth Online Assembly (NOYA), to empower the youth through timely dissemination of Information on career enhancing, trainings, job and employment placement opportunities via a unified platform so as to boost youth employment in the country.

Director Press and Public Relations Mohammed Manga in a statement quoted Honourable Minister of Youth and Sports Development, Mr. Sunday Dare, to have initiative in line with the present Administration’s avowed determination to lifting of 100 million Nigerians out of poverty in the next 10 years.
The minister spoke while was declaring closed a 3-day Sensitisation Workshop organised by his Ministry on the use of NOYA, held at the National Youth Centre, Odo-emu in Osun State today,

Represented by the Director, Procurement Department of the Ministry, Mr. Segun Oke, the Minister affirmed that the ministry recognises the fact that the energy, skills and aspirations of young people are crucial assets which no country can afford to waste.

He added that, helping the youth to realize their full potentials by gaining access to employment is no doubt a prerequisite to poverty and sustainable development of Nigeria.

Dare stated further that, rather than seeing youth as a burden to the society, the creation of a youth template offers the government a distinctive opportunity to focus on employment and job creation for young persons in the country.

According to him, the Ministry has in the last few years, conducted different skills acquisition and empowerment programmes as a result of the need to lift a huge number of youth out of poverty to ensure their productive and viable occupational engagement.

The Minister explained that “it is on this note that the Ministry is creating awareness and innovative opportunities for Nigerian youth by advancing nimble values and principles, creating a safe space for networking, developing new skills, sharing ideas and flourishing together through leveraging on NOYA to crowd source youth employment in Nigeria”

While emphasising that young persons have over the years, played vital roles that changed the world, despite their peculiar challenges, the Minister added that the NOYA platform will re-invent the future of the youth through knowledge and creativity to escape poverty traps and the likes.

He therefore called on the youth in the country to take up the challenge for self-development as it will not only support their inclusion in nation building but also give them a leverage in global economy.

Also speaking at the Jos Zone of the programme held for youth from the Northern Region, the Minister who was represented by the Director, Network and Social Mobilization of the Ministry, Hajia Amina Dauren stated that the priority focus of Mr. President, formed the background that created the NOYA, DEEL as well as other activities, programmes and youth intiatives of the Ministry.

He added that the initiatives aims at bringing out the skills and potentials of the youth in the country with a view to creating a sustainable pathway for ending poverty and ensuring their productive and viable occupational engagement.

Earlier in his remarks, the Director, Enterprise Development and Promotion Department of the Ministry, (EDP), Mr. Momoh Olugbenga, stated that youth are predominantly the users of the internet for social interaction hence the need to harness their creativenes for socio-economic development of the Nigeria.

He described the NOYA platform as a one stop shop that would provide opportunities, peer networking and socialization for our teeming youth thereby making them self-reliant, self-employed, so as to boost socio-economic development of the country.