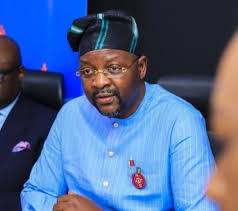 The Federal Government has said that it will commence the implementation of the National Youth Action Plan (YAP) on Youth, Peace and Security (YPS), across the 36 States of the Federation beginning with some pilot States.
Director Press and Public Relations Mohammed Manga in a statement said it is with aimed at harnessing their potentials towards the promotion of lasting peace, security and sustainable development of the country.
According to the Statement, the Minister of Youth and Sports Development, Mr. Sunday Dare spoke when he met with officials of the High Level Strategy United Nations System in Nigeria and Development Partners
on the implications of the Action Plan on Youth, Peace and Security (YPS).
He spoke on Friday in his Office at the Moshood Abiola National Stadium, Abuja,
According to him, the YPS National Action Plan was a process to domesticate the United Nations Security Council Resolution (UNSCR) 2250 which was launched in 2015 by the United Nations Security Council under the leadership of Hashemite Kingdom of Jordan to recognize that youth have a critical and positive role to play in building sustainable peace in the world at large.

The Minister stated further that following the launching of the Youth, Peace and Security (YPS) National Action Plan (NAP) in 2021, the Ministry has concluded plans for its implementation in the 36 States of the Federation, using Adamawa, Anambra, Delta, Kaduna, Oyo and Plateau as pilot States.

The chosen States he noted, “will be used to measure impact so that the data collected will guide scaling full implementation to other states”, he said.

Dare explained that the resolution stresses the importance of addressing the conditions and factors leading to the rise of violent radicalisation and extremism among youth.

Against that backdrop, Dare said, “Nigeria began the process to develop its YPS NAP to domesticate UNSCR 2250, adding that the resolution is the first fully dedicated to recognizing the importance and positive role young women and men play in the maintenance and promotion of international peace and security.

Speaking earlier, the Co-Chair, Nigeria Coalition on Youth, Peace and Security, Mr. Theophilus Ekpon, while updating the Minister on the YPS plan, said the coalition’s main objective is to ensure that young people at the grassroot are carried along and given opportunity to be⁶
part of the Action Plan.

The coalition he said, has come up with plans based on the five main pillars for Action by the United Nations Security Council Resolution 2250 which includes participation, protection prevention, partnership disengagement and reintegration, as well as how to synergize with the stakeholders for the successful implementation of the action plan at the pilot States.