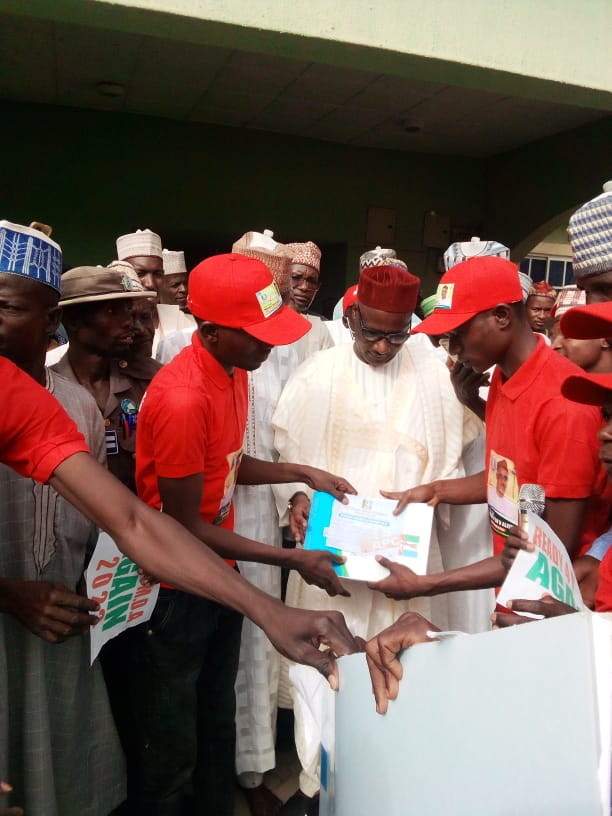 Constituents of Birninkudu/Buji federal constituency in Jigawa state, have presented a cheque of N10M to the member representing them in the House of representatives Honourable Magaji Da’u Aliyu as their contribution for him to purchase his nomination form ahead of 2023 general election.

Speaking while receiving the donation, the lawmaker who is also the Chairman house committee on power, in the House of Representatives said he was motivated to re-contest the position from his constituents who gave him nomination form.

According to him “This donation from my constituets means they need more from me, it is a challenge, but I will continue to do my best for the improvement of the life of my people at all cost”.

He also promised to continue with good representation through the provision of developmental projects that will improve the social and economic lives of his people..

Speaking while presenting the cheque to the law maker the chairman of the political groups under the aegis of Hon Magaji Dau Supporters, Comrade Shamsuddeen Umar said, they deemed it necessary to give extra support to their reps member for the constituency to continue enjoying his good representation.

Comrade Shamsuddeen maintained that “It is in appreciation of effective representation in the national assembly.
“Community members from across 22 political wards in Birnin Kudu Buji federal constituency have donated N10 million to Hon Magaji Dau Aliyu to purchase nomination form for his third term bid”.

“Hon Aliyu, has brought a lot of developmental projects to the constituency which included Hospital, Higher institutions, power substation, road projects, electrification, agriculture and many other projects that impacted positively on the lives of the people in the constituency and beyond”

Shamsuddern added that, in terms of inculcating moral discipline and human development, Hon Magaji has an incomparable record, as he always admonished the youth to shun drug abuse and other social vices that may ruin their lives.

“In the last 7 years he secured employment for over 500 youths in the constituency, over 20,000 women and other groups received different packages of empowerment in addition to 2,500 persons in his monthly allowance, this is unprecedented “

Shamsuddeen noted that, they opened an account and raise N16.4 million , out of which they now presented the donation of N10 Million for the Honourable member to purchase the nomination form adding that they now have N6.4 million as reserve for campaign.