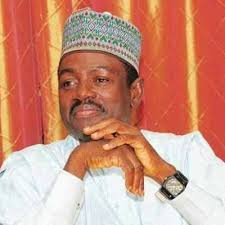 Immediate past former National Secretary of All Progressive Grand Alliance, (APGA) Mr. Labaran Maku has indicated that his return to the PDP will end the APC rule in Nasarawa state.

Labaran Maku spoke when when he was formally received into the PDP by the state working officials and his supporters at the secretariat in Lafia the state capital.

Addressing the gathering, Maku assured that with APGA supporters now in the PDP, APC is already in a state of panic.

“My return to the PDP will mark the end of the APC in the state. In the past they capitalised on our differences to rig elections but now that we have put all differences apart and God with us Nasarawa state is about to recover from misrule and untold hardship the APC administration had unleash on it.

Maku however appealed to the PDP family in the state to sustain the spirit of brotherhood and unity exhibited to woo him and other aggrieved members back to the party.

He appealed to all members of the party who had decamped to other parties to return to the PDP because it is the last hope of the common man in the state right now.

In his remark the state chairman of PDP chief Francis Orogu commended Hon. Maku for heeding to their appeal to return to the party, a process which commenced since 2019 but made possible in 2022.

Orogu said that ninety five percent of the party membership wanted Maku back because they believe Maku possess all it takes to bring the state out of the deep pit of hardship and insecurity the APC led administrations has plunged the state.

“Your return to the party today has brought hope and assurance just like Moses and Joshua in the Bible who led Israel out of bondage into the promised land”, Orogu said.

“I agree that with the return of Labaran Maku to the party it will no longer be four plus four but four plus zero.

He lamented that citizens in the are tired of the APC administration that has brought hardship and pain, noting that apart from the motor park in Bukan Sidi every other projects in the state were PDP initiated projects that were commissioned.

Orogu assured the party that the forthcoming state primary will be fair and transparent.

The state chairman appealed to members of the party who have decamped to let the past behind and return to join hands to wrestle power from the ruling APC in 2023 election.