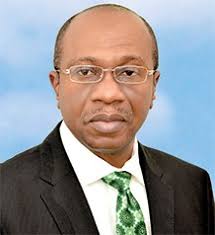 A youth group in Jigawa state under the agies of Unified Northern Forum (UNF) has urged the Central Bank of Nigeria (CBN) Governor Godwin Emefiele to contest for president in 2023 general election for more prosperity and united Nigeria.

They described Emefiele as a champion of agricultural development.
The chairman of the group, Comrade Abdullahi Abbas commended Emefiele who anchored policies that has brought timely intervention to save the economy.
Abbas gave the commendation in a speech delivered at a youth political awareness lecture in Dutse the state capital.
He maintained that, “under Emefiele the country’s agricultural sector has received a number of interventions which have boosted production and generated more jobs”.

According to him “In 2017, the Jigawa State Government accessed N5 billion loan from CBN to finance its agricultural development, in 2021 CBN disbursed over N4 billion as loans to our rice farmers, Jigawa State is also among 15 states that benefited from 52billion Wheat Cultivation grant and ove 25,000 ‘unbanked’ women and youths enrolled into banking system which made financial service accessible to them”

“We believe Dr. Godwin Emefiele has all it takes to make Nigeria a great nation, rejuvenate our economy and take us to the status of developing nation where peace, progress and prosperity will be realised”.

Abbas added that, thousands of Jigawa state farmers have moved from subsistence farming to commercial framing as a result of anchor borrowers program and other agricultural intervention they accessed from the CBN
In his speech the chief Convener Unified Northern Nigeria Youth Forum, Mohammed Salihu Danlami said, the policy introduced by CBN governor is largely best described as shifting Nigerian economy from oil economy (Mono Economy) to more diversified economy with agriculture, mining and industries as main drivers”

“We are optimistic that, if he becomes the president of Nigeria he will do more on these policies and Nigeria will certainly attained developed Nation status”.

Dallami called on all Notherners and Nigerians to join the call for Emifele to come and contest to become Nigerian president in the 2023 election for peace unity and development of the nation.
In his keynote address at the occasion the spokesperson of the Forum comrade Aliyu Muhammad Sani, Nigeria is currently in need of a strongman that is patriotic, pragmatic who already have a blue print that can guide him to work around the clock to move the nation forward through peace, progress and prosperity.

“Nigerians should look into the 37 interventions initiated by Dr Godwin Emefiele, they will realize that all the required qualities and track record for one to become next Nigerian President abound in him therefore we believe he can do the Job” Mr Sani declared.