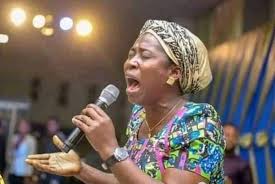 ***Osinachi will want her kids far away from their father

For exposing children of late iconic gospel singer, Osinachi Nwachukwu to the parade of their embattled father, Mr. Peter Nwachukwu, being investigated for her death, a – child and gender rights advocacy group has called on Minister of Women Affairs, Dame Pauline Tallen to focus on the management of the three children for trauma rather than expose them to more traumatizing events..

In a statement issued by the Executive Director of the group – Men Against Rape Foundation (MARF), Lemmy Ughegbe, wondered why Dame Tallen was more interested in posing for the camera than the state of the mental health of Osinachi’s children.

Ughegbe said despite MARF’s unalloyed stand that Mr. Nwachukwu be made to face the full wrath of the law, global best practices and even common sense forbid that the children be exposed to a parade of their father for it further traumatizes them.

According to him, their father can be paraded even on the street for all he cares, but the children who are minors ought not be exposed to it in line with global best practices.

Ughegbe said the Minister was too well traveled and exposed to feign ignorance of the psychosocial consequences of continually exposing the children to traumatizing experiences such parading of their father before them especially after the trauma of losing their mother to years of abuse by same man.

“Priority should be genuine care for the mental health of the children not political.mileage for the minister through publicity stunts. Even if she wants publicity, she can leave the children out. They deserve to be protected from further trauma.

Part of the statement reads: “Minister Pauline Tallen seems more focused on publicity stunts and clout chasing in the Osinachi Nwachukwu case than protecting the mental health of the late music maestro’s children.

“Despite how traumatized the kids are, Tallen and all those around her rather than get the children completely away from the radar of the public and away from all of these further traumatizing activities, they soak them in, apparently, for the optics.

“For a minister who is well traveled and exposed, she can’t feign ignorance of the effect of parading their father before them. It is lack of care for the kids that she has demonstrated.

“As a Child and Gender Rights Advocate, I condemn the continuing traumatization of those kids and urge Madam Minister to make the welfare and psychosocial need of the children a priority even as we call for a thorough investigation into the allegations of Domestic Violence brought against Osinachi’s husband, Peter Nwachukwu. That is what justice will mean for Osinachi if we could here her speak to us

“It is therefore incumbent on Madam Minister and relevant agencies to excuse the children from the scene and provide the needed psychosocial support for them which is mandated by the provisions of the Violence Against Persons Prohibition Act (VAPP) 2015.