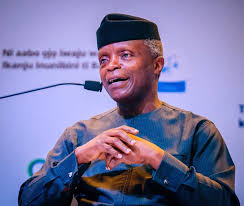 Rather than considering it as a betrayal, I see Professor Yemi Osinbajo’s declaration to contest for the post of the President of Nigeria as a very courageous act for which he must be commended. To think that a man would stand up against his benefactor by declaring to contest for the same position as the benefactor should make one ask the reason why?

After rising from being a law teacher and growing through a political career to becoming the Vice President of the Federal Republic of Nigeria, most of which is courtesy of the benevolence of Asiwaju Bola Ahmed Tinubu, one should expect some loyalty from the Prof. Osinbajo to his political godfather. But it doesn’t always work that way.

Ask Osinbajo who was responsible for making him all that he has been as a lawyer, public servant and now vice president and he would tell you it is the Almighty God and not Tinubu. Therefore his loyalty does not really lie to Tinubu even though he remains grateful to him for the roles God has used him to play in his life.

So which man would come so close to becoming the President of Nigeria, with the understanding of government workings and the acumen of a professor of law who wanted to change Nigeria for the better but was frustrated and now has a chance to be the change himself but would not attempt to do so in the name loyalty? Loyalty to who?

There always comes a time in man’s life when he would be required to decide whether to live in pursuit of a dream and personal conviction that he has or slowly begins to die, pining away with a sense of regret for not trying to become his dream. Professor Osinbajo was at that crossroads until Monday when he declared to contest Nigeria’s presidency. He chose to live for a dream that he has of Nigeria and himself. He was courageous to act in his convictions.

President Muhammadu Buhari’s administration is a litany of failed expectations to the disappointment of many of his supporters in 2015 and between Osinbajo and Tinubu, who is to blame for the perceived abysmal performance of the regime? Is it Osinbajo who was supposed to be the Chairman of the National Economic Council but didn’t really have any powers to be responsible for managing the economy or is it Tinubu who actually made Buhari president by making many of us believe what he was not?

Without unnecessary speculations, I would judge Osinbajo by his proven acts which I, without apologies, consider to be very progressive. The records speak for themselves of the brief times he acted as Acting President and the courageous decisions he made. I would not hesitate to state, though, for a rather personal and maybe selfish consideration that it was during his time as Acting President, that I was recognised as a human rights defender and appointed to Nigeria’s Inter-Ministerial Committee on the Universal Periodic Review of Human Rights to the United Nations. I doubt if that would have ever happened if he were not the one in the saddle of the Presidency at that time. That is why after spending millions of Naira of personal funds to do the work of the Committee, I, my other civil society colleague, Austin Erameh (of then CISLAC) and others are yet to be reimbursed more than 4 years after we completed our work. What defiant inefficiency! Now we are headed to Court to enforce reimbursements for personal monies spent in doing the work of a Federal Government Treaty Reporting Committee. I have sometimes asked myself if Osinbajo authorised an appointment, would he not also authorise remuneration and funding for such work?

I however do not hide my personal likeness for Osinbajo and wish that he becomes President of Nigeria if possible. I have never met him before and I believe that he certainly does not know me but if for nothing, he is so presidential in his speech and composure. As a lawyer with a background in international law, that would really make me proud to have a President that speaks at the United Nations General Assembly and the whole world listens. Bad as they have considered the legendary Robert Mugabe, whenever he spoke at world events, his oratorical skills always commanded a world audience. It is called national pride.

Again as a professor of law and former commissioner for justice, with a number of unprecedented justice innovations in Lagos State to his credit, there would be greater hope that the much needed judicial reforms in Nigeria would be achieved much faster and responsive to modern realities under an Osinbajo’s Presidency.

I am not unaware of how soon an Osinbajo’s Presidency if it ever happens would be seen by some, especially in the vineyard of God as an answer to their prayers to get close to political power and wield the same. I recall how defiant and arrogant Pastor Laolu Akande carried himself as a Special Adviser to the Office of the Vice President when we appeared together as guests on a live Radio Nigeria programme. His only qualification for getting that job perhaps is because he was a pastor. I also remember how a self-acclaimed female pastor of the Redeemed Christian Church of God promised she would deal with me because they owned the office of the Vice President of Nigeria.

Nigeria does not need another divisive personality as the president rather the country needs a courageous personality like Osinbajo who could defy his godfather in his quest to actualise his convictions that he can make Nigeria great again (MNGA). It is such a person as a president that can make the tough decisions that are required to salvage the present political and economic quagmire reflected in the high-level insecurity and unprecedented rates of unemployment in the country at the moment.