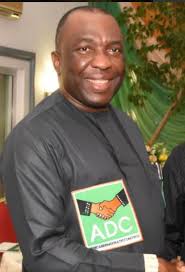 National Chairman of the African Democratic Congress (ADC), Mr. Ralphs Nwosu, on Monday described Osinbajo’s declaration as a big joke and an insult to the sensibilities of Nigerians

He therefore warned Nigerians not to be deceived by his declaration to run for the office of President in 2023.

Nwosu who acknowledged the constitutional right of Osinbajo to make the declaration in a statement in Abuja, described Osinbajo’s declaration as an insult on Nigerians seeing that President Muhammdu Buhari’s administration for which he has been an integral part has failed woefully to deliver on all its promises.

He said that neither Osinbajo nor the All Progressives Congress (APC) presidential aspirants have anything new to contribute in alleviating the suffering of the masses which they have aggravated in the last seven years.

“Osinbajo is Buhari and Buhari is Osinbajo. Osinbajo cannot promise to achieve what Buhari failed to achieve in the last seven years and expect Nigerians to take him serious,” he declared.

He urged Nigerians not to again place their trust in the APC and any of its aspirants, saying the ADC is poised to offer the much needed transformational leadership through young and dynamic candidates at all levels during the 2023 general elections.

“Osinbajo and Buhari have failed the litmus test of leadership. An Osinbajo presidency will be worse than the present administration of Buhari as VP would remain the voice of Jacob with Buhari as the hand of Esau, if elected by Nigerians.

“Which policy initiated by Buhari and Osinbajo has benefitted Nigerians? Today, terrorists have dismembered key states and local governments from the country under the watch of Buhari/Osinbajo.

“Yet Osinbajo promises to restore security and grow the economy! Nigerians will be going back to Egypt should they elect Osinbajo who has cooperated with a president that has ruined the nation’s economy through knee-jerk policies.

He urged Osinbajo to complete his Vice President’s tenure and retire quietly to Ikenne in Ogun State. The ADC is ready to offer the kind of leadership that has eluded the country in the last seven years.