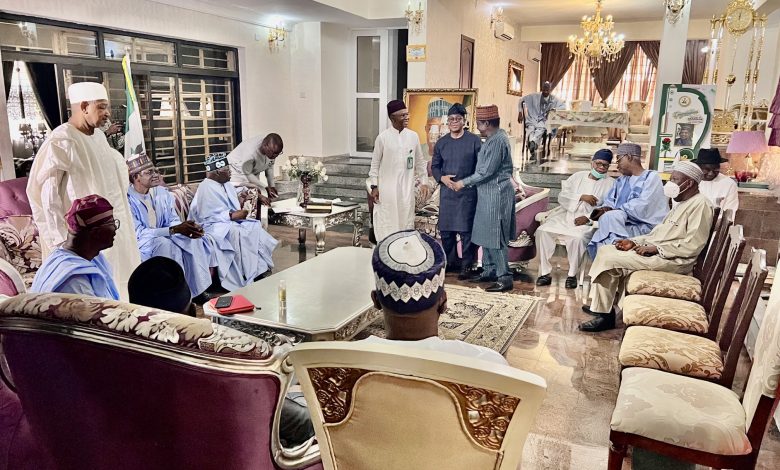 Vice President Yemi Osinbajo’s declaration on Monday, has prompted Ahmed Bola Tinubu’s camp to quickly organise consultation with APC governors in Abuja in what appears like a panic mode.

The National Update checks indicated that the meeting is ongoing at Kebbi Governors lodge in Abuja.
Ahmed Tinubu is a former Senator and former governor of Lagos State who is yet to declare his interest to contest the 2023 presidential election officially

The meeting has in attendance the Chairman of Progressives Governors Forum (PGF), Alhaji Abubakar Atiku Bagudu, Kaduna governor, Malam Nasir El-Rufai, and host of others including all those who met with Osinbajo late Sunday before his declaration on Monday.
Kwara State governor, Alhaji Abdulrahman Abdulrazaq who was absent at Osinbajo’s meeting on Sunday which held at his official residence at Aguda House located at the presidential villa, Abuja reportedly flew in from London early Monday morning to join Tinubu’s meeting.
National Update gathered that Tinubu’s meeting was to mitigate against some unfavourable political developments between Sunday and Monday.
Osinbajo had reeled out ten point agenda in his speech on Channels Television which he intends to do, if given opportunity to rule the nation.
He also pointed out that he would consolidate on achievements of his principal, President Muhammadu Buhari when he become the president.
Recall that the national leader of APC had visited President Muhamadu Buhari to intimate him of his interest to contest for the presidency’ by stepping into his shoes not on his toes.
He is yet to officially declare as Osinbajo has done.