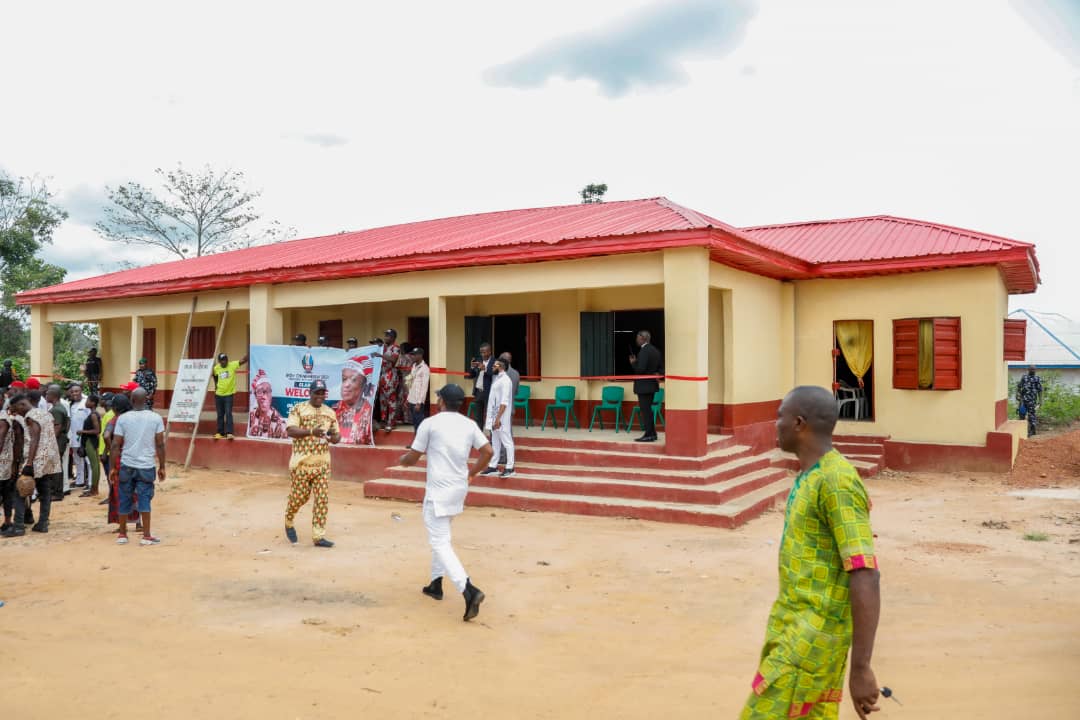 Teachers and students of Arochukwu Community school were full of excitement and gratitude over the renovation of their school facility that has now shielded them from sun and the rains.
Their Senatorial representative Senator Orji Uzor Kalu had renovated the school upgrading it to wear a new look making the environment more conducive for learning.

The School’s staff made the disclosure on Monday at Arochukwu LGA of Abia-North while expressing their Joy to the Senate Chief Whip, Kalu when he led a delegation to commission their newly reconstructed school building which he fastracked in the community.

Narrating their ordeals prior to Kalu’s rescue, Head Teacher of the school Mrs. Ejim Obioma disclosed that whenever it rained, it disrupted all their activities in the school due to the deplorable condition of the school building which she said further discouraged the children from coming to school. Obioma added that the pupils and staff also had to endure the heat of the scorching sun, whenever it wasn’t raining.

“The joy you have brought to us is immeasurable, that is why we are all gathered here, with the reconstruction of this building and the provision of learning materials, you have boosted the morale of these students.

“You have made them willing to learn and happy to come to school and as for the teachers, you have made us proud and increased our zeal to teach these children because you have made everything easy for us.
Speaking further, she stated that Orji Kalu’s dedication to impact in Arochukwu LGA made it seem like he is an Indigene of the community.

She said; “Before your intervention this building was so terrible that most of the students stopped coming to schools because the building used to be dilapidated with no roof. Both the pupils and staff were always beaten by the sun and the rain, but you have reconstructed this school as if you’re an indigene of Arochukwu. “You didn’t only reconstruct the building, you also provided furniture, study textbooks, bags and other writing materials, we have never had it this good.
“The road which leads to this school has been so bad for the last 30 years but you have also built it for us. The school community offered prayers for Orji Kalu saying that they support him to become the next President of the country  in 2023.

Kalu in his address said the gesture signifies his commitment to improve the lives of his constituents in addition to other developmental projects which he has facilitated in the community.
The Senate Chief Whip who has continued to receive torrents of accolades for the construction of massive rural roads, installation of boreholes and other projects used the opportunity to advise the students to strive for excellence and remain focused in their academic pursuits.

He said; ‘Amuri and Amoba’ now have Borehole Water.  I run a “talk and do” type of government, one that matches words with action. I am not a Senator that says what he can’t do.

“The pupils must be ready to show seriousness in their studies and willingness to learn. Don’t be deceived by the saying that Children of the rich are not serious in education because three of my children studied Law and they all graduated with first class.
“So you must put more effort in reading your books and make sure that you finish in first position. Your parents are using their hard earned money to pay your school fees, so you mustn’t let it go in vain by making sure that you perform well in your studies.

Kalu also lamented the discontinuation of the free education programme in the state which he implemented when he was Governor of the state from 1999-2007.
He urged the staff to support the All Progressive’s Congress (APC) to take over the state in 2023 for them to enjoy free education and other dividends of democracy.

“Unlike before when I was Governor I ensured that we had free education. Unfortunately since I left you people have been paying to get education. Aside from renovation, we have distributed free learning materials which include, school bags, text books, desks and so on.
“If you support the APC to take over the state, we will ensure that free education comes back. Check the records none of your representatives in the last eight years has done one third of what we are doing currently in my first term at the Senate” Orji Kalu stated.