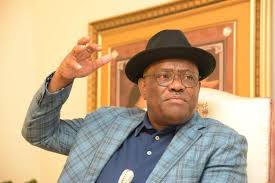 Rivers State Governor and presidential aspirant of the people Democratic party (PDP) Nyesom Wike has berated the council of states under President Mohammed Buhari for granting pardon to two former governor’s Jolly Nyame and Joshua Dariye of Plateau and Taraba states respectively.
Addressing PDP supporters at the party Secretariat in Minna at the weekend, Governor Wike noted, that the government that claimed to be Fighting Corruption is now granting pardon to the governors that stole state funds in bilions.
“This is the highest level of irresponsibility to be displayed by a government that claimed to be figthing Corruption in the country” he stated.

However WIke said he is not surprised going by the fact that the only project that the All Progressive Congress (APC) led government has executed in some parts of Northern Nigeria is armed banditry.
He said apart from banditry and high level of poverty and insecurity they bequeathed to States across the North Central and North west there is nothing the APC led government was able to achieve in the last seven years of their Maladministration.

According to him the APC led administration in the country could best be described as monumental disappointment to Nigerians.
He boasted that he will dislodge the APC administration if given the PDP ticket at the party’s Congress.
According to him, the APC administration in the last seven years has succeeded in creating fear, hunger, poverty and insecurity in the country adding that they have failed the Nigerian people without any tangible project to show apart from banditry in the North Central and the North West.
According to him, if given the PDP ticket, APC should be prepared to pack out of the Villa “because I will give them the run for their money. “Just give me the party ticket at the Congress I’m assuring you I will win at the general election in 2023”.
He said he has paid his dues for the PDP adding that no amount of blackmail, threats and intimidation will deter him from taking part in the presidential race under the PDP.
He therefore urged the Niger State delegate of the party to vote for him at the party’s Congress.
“I have been a member of PDP since 1998. The party has given me everything I wanted in my life. No matter the provocation, I will never leave the PDP. No amount of threat and blackmail that will deter me. I have paid my dues in PDP.
“So my delegates in Niger State, I’m requesting for your votes at the convention. So please I need your massive votes at the Congress.”
He insisted that the day he is given the party’s ticket the APC administration has come to an end adding that he will go all out to win the general election in 2023.