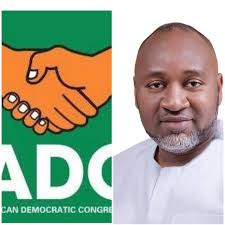 The alleged murder of seven youths by ‘Ebubeagu Operatives’ in Oru East Local Government Area of Imo State has been condemned by the Presidential candidate of the African Democratic Congress (ADC), Mr. Dumebi Kachikwu,
Gunmen suspected to be operatives of Ebubeagu security outfit had reportedly killed seven wedding guests in Awomama, Oru West LGA of Imo State.
As they were returning home, Ebubeagu operatives saw them on motorcycles and opened fire on them.
Kachikwu in a statement by his campaign office in Abuja, described the incident as barbaric and wicked, even as he called on the police and other security agencies to swiftly arrest and prosecute the perpetrators of the dastardly act.

The youths were said to have been killed while returning from a traditional wedding in Awomama, Oru East L.G.A.

Five other persons are said to be missing following the attack.

“This killing is simply unconscionable and man’s inhumanity to man. How can a security outfit purportedly set up to protect a vulnerable population from harassment and attacks turn their guns on their own kith and kin?”

“The South East can ill-afford this type of bloodletting especially when innocent youths who are leaders of the future are being sent to their early graves in such cruel and gruesome manner.

“The challenges of survival in the country are becoming Herculean and it is time for law enforcement agencies to ensure that the people are protected from unnecessary attacks and killings of citizens especially innocent youths by unscrupulous elements masquerading as Ebubeagu security operatives,” Kachikwu said.

He called on the authorities of Ebubeagu to call their personnel to order by ensuring that their operatives are properly screened and trained in the art of protecting their communities.

He equally called on them to prevent their ranks from being infiltrated by persons with sinister motives.