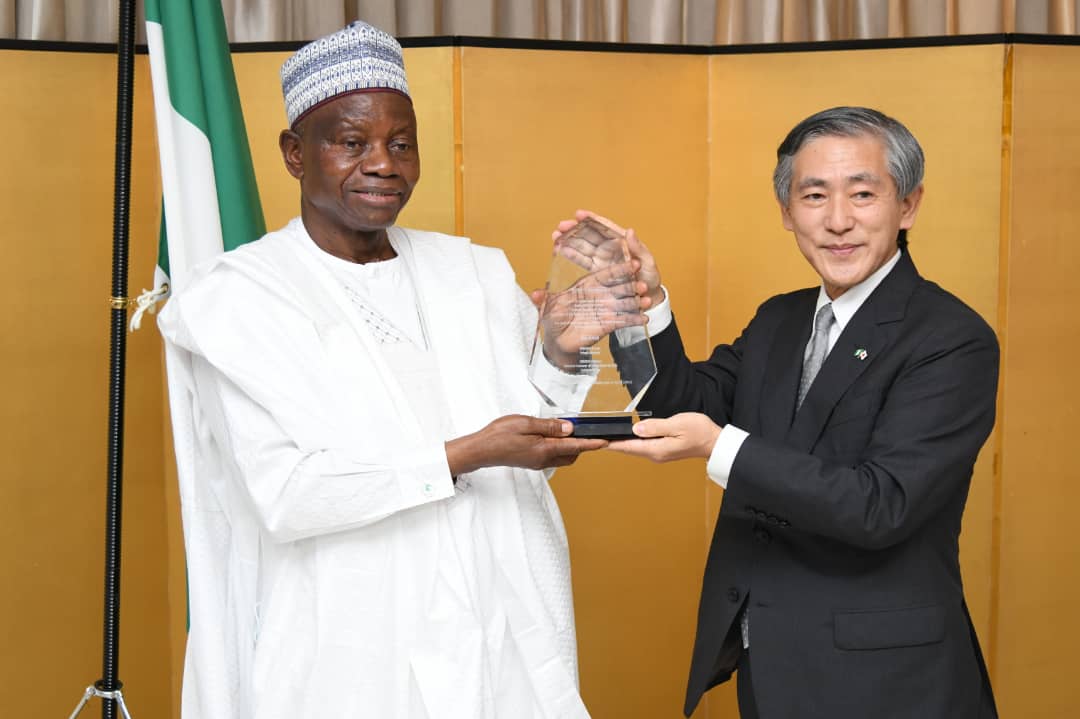 The President of the Nigeria Olympic Committee (NOC), Engr. Habu Gumel has been conferred with “The Order of the Rising Sun, Gold Rays with Neck Ribbon Award” by His Majesty, the Emperor of Japan, Emperor Hironomiya Naruhito.
Director Press and Public Relations Mohammed Manga in a statement indicated that the conferment ceremony held at the Japanese Embassy in Abuja on Tuesday.

He quoted the Japanese Ambassador to Nigeria, Matsunaga Kazuyoshi to have stated that the Award was in recognition of his contributions towards the promotion and strengthening of bilateral relationships between Nigeria and Japan.
This he said would be achieved through sports, curltural exchange as well as for Olympic Coordination towards the success of the 2020 Tokyo Olympics Games.

While extolling the sterling virtues of Engr. Gumel, Ambassador Kazuyoshi noted that Nigeria has talents in sports that if given sponsorship by sports loving philanthropists, would fly the nation’s flag globally.

He therefore called on Nigerian Youth to take advantage of the Internet to showcase their sporting talents with a view to attracting foreign sponsors.

The Ambassador commended the Management of the Federal Ministry of Youth and Sports Development and President Muhammadu Buhari-led Administration in particular, for creating the enabling environment for the development of sports in the country.

The Honourable Minister of Youth and Sports Development, Mr. Sunday Dare thanked the Government of Japan for finding Engr Gumel worthy of the Award which he said, was not only for the glory of the Gumel family, but also for the entirety of Nigeria as a country.

Dare also commended the NOC President for his contributions to the development of sports not only within the country but also through the Nigeria and International Olympic Committees.

He described Engr. Gumel as a great resource in the field of sports noting that he is the fourth person globally to receive the “Order of the Rising Sun, Gold Rays with Neck Ribbon Award” of the Japanese government .

He also pledged Federal Government’s unflinching support to the creation of an enabling environment for the development of all forms of sporting activities in the country that will assist Nigerian youth to showcase their talent in the field so as to contribute to the socio-economic development of our nation.

Responding, the Award recipient, Engr. Habu Gumel,
thanked the Japanese Government for appreciating his contributions to the promotion of friendship between Nigeria and Japan, through Sports and cultural exchanges under the platform of the Olympic Games.

He stated that the activities of Tokyo Olympics which birthed the award began in earnest in September 2013 at the 125th Session of the International Olympic Committee in Buenos Aires, Argentina, when Tokyo won the bid to host the Summer Olympic Games.

Gumel applauded the Japanese Government for allowing the Games to hold in their country, despite the palpable risks posed by the COVID-19 pandemic.

He explained that “the cordial relationship between both countries, promoted through close ties with the Japanese Ambassador to Nigeria, Matsunaga Kazuyoshi had over the years, culminated in sports exchanges and Olympic channels, leading to the creation of opportunities for Nigerian National Coaches in Volleyball, Badminton, Baseball, Karate, etc to be trained at the National Institute of Sports in Tokyo, Japan, among others”.

The NOC President thanked the Honourable Minister of Youth and Sports Development Mr Sunday Dare, the Management Staff of the Ministry and President Muhammadu Buhari in particular, for their relentless efforts at empowering both the Nigeria Olympic Committee (NOC) and the International Olympic Committee (IOC) to thrive.

The Order of the Rising Sun, which was established in 1875, is a Japanese Order which is awarded to individuals who have outstanding contributions in promoting international relations and advancing Japanese culture in their respective fields.