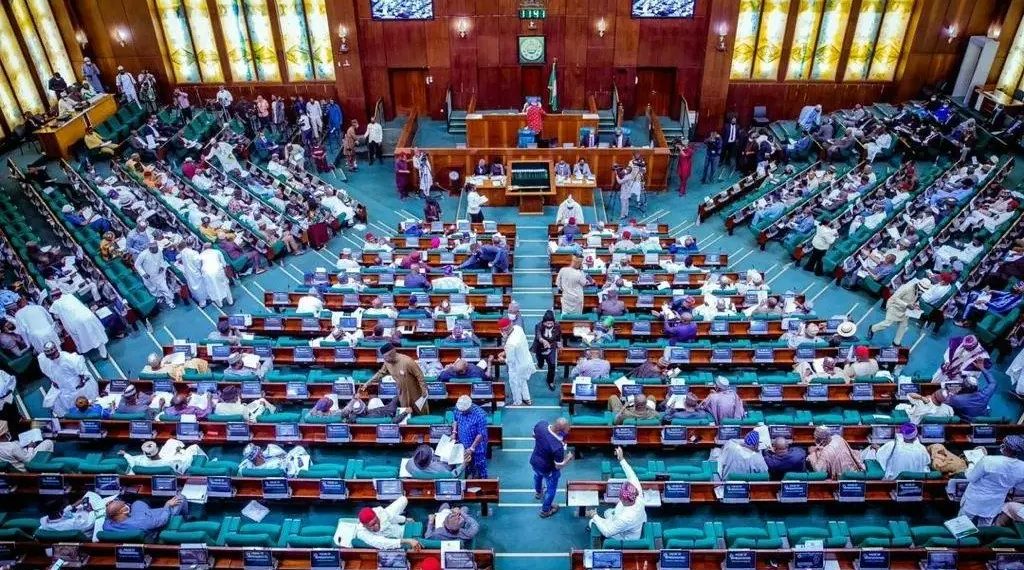 The Minority Caucus of the House of Representatives has expressed solidarity with the senate over the threat to serve President Muhammadu Buhari an impeachment notice at the expiration of six weeks ultimatum given to him to address insecurity in the country.

The Minority Leader of the House of Representatives, Ndudi Elumelu stated this while briefing newsmen after an enlarged meeting with PDP Senate Caucus led by Senator Philip Aduda at the National Assembly in Abuja on Thursday

Elumelu who addressed journalists in the company of senators from the red chamber pointed out that the House of Representatives is on the same page with the upper chamber on the issue of insecurity bedeviling the country under the APC led federal government.

He lamented that Abuja, “The seat of power is no longer safe and we cannot continue to fold our arms till things get worst”.

Elumelu said that “Recently Kuje Prison was attacked and as if that was not enough, Minister of Education directed that all students should vacate their campuses; similarly, the FCT has also directed that schools in FCT should hurriedly close because of inseurity, Abuja is no longer safe and things are stand still,”. he stressed.

He noted that on many occasions, the National Assembly had drawn the attention of President Muhammadu Buhari to the insecurity in the land adding that yet nothing concrete has been done to address it.

Elumelu also made reference to the scarcity of aviation fuel as well as inability of farmers to go to farm as he attributed all to the failure of APC led government.

It would be recalled that the minority caucus in the Senate on Wednesday slammed a six week ultimatum on President Muhammadu Buhari to fix the insecurity or face impeachment from the National Assembly.

Opposition senators stormed out of plenary chanting ‘Buhari must go’ as a way of venting their anger on the way the insecurity is encroaching on daily lives of individuals in the country.

It was however gathered that the meeting by the caucuses of the two chambers of the National Assembly was called to harmonise their positions on the impeachment procedure against President Muhammadu Buhari at the expiration of the six weeks ultimatum.

The removal of the President according to the Constitution must follow the following procedures:

” (1) The President or Vice-President may be removed from office in accordance with the provisions of this section.

(2) Whenever a notice of any allegation in writing signed by not less than one-third of the members of the National Assembly:-

(a) is presented to the President of the Senate;

(b) stating that the holder of the office of President or Vice-President is guilty of gross misconduct in the performance of the functions of his office, detailed particulars of which shall be specified,

(3) Within fourteen days of the presentation of the notice to the President of the Senate (whether or not any statement was made by the holder of the office in reply to the allegation contained in the notice) each House of the National Assembly shall resolve by motion without any debate whether or not the allegation shall be investigated.

(5) Within seven days of the passing of a motion under the foregoing provisions, the Chief Justice of Nigeria shall at the request of the President of the Senate appoint a Panel of seven persons who in his opinion are of unquestionable integrity, not being members of any public service, legislative house or political party, to investigate the allegation as provide in this section.

(6) The holder of an office whose conduct is being investigated under this section shall have the right to defend himself in person and be represented before the Panel by legal practitioners of his own choice.

(7) A Panel appointed under this section shall –

(a) have such powers and exercise its functions in accordance with such procedure as may be prescribed by the National Assembly; and

(b) within three months of its appointment report its findings to each House of the National Assembly.

(8) Where the Panel reports to each House of the National Assembly that the allegation has not been proved, no further proceedings shall be taken in respect of the matter.

(9) Where the report of the Panel is that the allegation against the holder of the office has been proved, then within fourteen days of the receipt of the report at the House the National Assembly shall consider the report, and if by a resolution of each House of the National Assembly supported by not less than two-thirds majority of all its members, the report of the Panel is adopted, then the holder of the office shall stand removed from office as from the date of the adoption of the report.

(10) No proceedings or determination of the Panel or of the National Assembly or any matter relating thereto shall be entertained or questioned in any court.

(11) In this section -“gross misconduct” means a grave violation or breach of the provisions of this Constitution or a misconduct of such nature as amounts in the opinion of the National Assembly to gross misconduct.”