Harvest of medals for Team Nigeria in Para-Athletics CWG 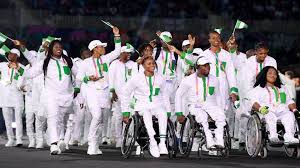 The on-going 2022 Commonwealth Games holding in Birmingham, has brought more fortunes for Team Nigeria as it has recorded 5 medals; 2 gold, 2 silver 1 bronze which has placed the country high on the medals table.
Director of Press and Public Relations
Mohammed Manga in a statement said Nwachukwu Chiemerie kickstarted the gold performances when she broke a new record that earned her a Gold medal in Discus.

According to him Folashade Oluwafemiayo and Bose Omolayo completely dominated the field, breaking this year’s Commonwealth Games with every lift until Oluwafemiayo broke another World Record with her last lift thus clinching the second gold for Nigeria while Bose Omolayo rounded it off with a Silver

Team Nigeria further recorded another feat with Obichukwu Ikechukwu winning a Silver medal in the men’s heavyweight category while Nnamdi Innocent’s lift of 132.5kg in the Men’s lightweight won a bronze medal for the country.