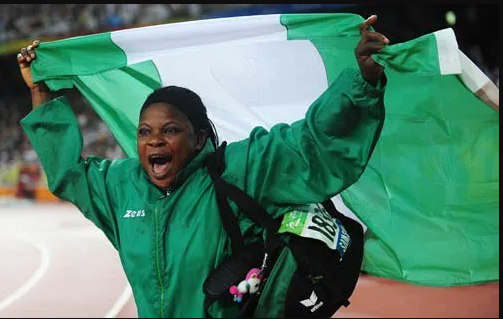 Team Nigeria is now leading African team on the medals table at the ongoing Commonwealth Games with additional gold medal on Saturday.

At the end of Day 8 at the Commonwealth Games in Birmingham, Team Nigeria crawled behind South Africa in the eighth position, with a total of seven Gold, three Silver, and six Bronze Medals, making a total of 16 medals.

However, on Saturday, Day 9, Nigeria’s athletes continued and dominated the Women’s F55-57 Shot Put event where Eucharia Iyayi won the gold, while Ugochi Alam settled for the bronze.

Iyayi did not just win the gold, she did it in style; setting a new Commonwealth Games Record with a 10.03 throw.

Team Nigeria, now have eight gold, three silver, and five bronze medals while South Africa now trails behind Nigeria with seven gold, seven silver, and nine bronze medals.
Team Nigeria had up their ante with two gold medals and a bronze from the wrestling match on Day 8 of the ongoing 2022 Commonwealth Games in Birmingham.

Odunayo Adekuoroye defended the title she won in 2018 at the Gold Coast with a dominant performance in the women’s 57kg class.

With 7 gold, 3 silver and 6 bronze medals, Team Nigeria remains in 8th place on the Medal Table.