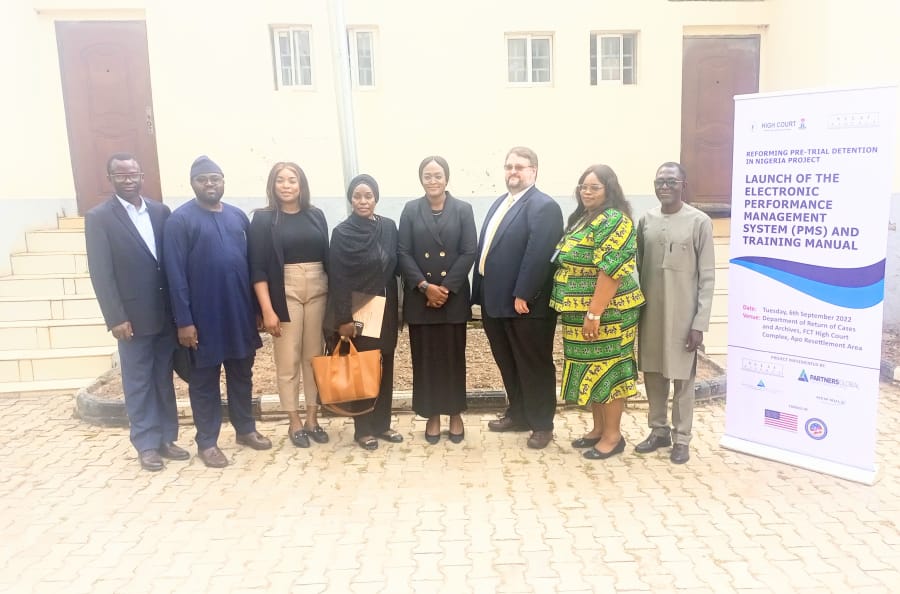 Programme Manager, NULAI-Nigeria, Mr Mahmud Yusuf said that the
electronic PMS and Training Manual
was for FCT Magistrate Courts and the Department of Return of Cases and Archives.

The project which began in 2018, was supported by the Bureau for International Narcotics and Law Enforcement Affairs (INL) of the US States Department.

Speaking at the launch, Yusuf lamented that manual collation of court cases has caused
many inmates to languish in detention without trial

“We found out that the reason for such delays in administration of justice was that in most of the cases the court had moved; the Presiding Judge had been elevated or deceased or there was an issue with the court so you had that backlog of cases that were not assigned a return date.

“In 2020, over 180 cases did not have
returning dates at the Kuje Custodial Centre. We submitted a list of these places to the then chief judge of the FCT.

“We thought that how could we address this issue. That was where we came up with the idea of a system that will help in tracking the assignment and then monitor the case so that we don’t have cases lost within the system like we had the 180 cases.”

Yusuf further said that PMS was a technological innovation aimed at building the capacity of the Nigerian Correctional Service to have a digital structure and provide assistance for legal representation.

“In the area of legal representation, we have partners in Nasarawa State University, Keffi, Baze University, University of Abuja and Nile University where students help in interviewing persons under detention in Kuje and Keffi correctional centres.

“These students give us the reports and we engage lawyers to provide pro bono services,” he said.

The programme manager also said that the pilot project was in seven magistrate districts in the FCT including Kuje, Bwari and Gwagwalada Area Councils adding that with time, it would be expanded to other states.

Launching the project, Chief Judge of the FCT High Court, Justice Husseini Yusuf who was represented by Justice Njideka Nwosu-Iheme, said that the project would help provide solutions to some of the problems faced by magistrates.

“Today, we are indeed making history by launching our first ever PMS to revolutionise the administration of justice for optimum efficiency.

“This innovation bears an eloquent statement of our unflinching commitment as a court to continually prioritise deployment of technology as judicial aid.

“This is to enhance greater efficiency in the administration of justice by helping to provide solutions to complex problems that were previously handled manually.

“I have no doubt therefore that this performance management system will support the courts to facilitate monitoring and tracking of assignment of cases, as well as to identify and resolve gaps and obstacles to timely trial, particularly in scheduling of court dates.”

Also speaking, Director, Bureau for International Narcotics and Law Enforcement Affairs (INL) of the US States Department, Mr Jason Smith said they supported the project for people to have access to justice.

Smith said that the bureau had been supporting the strengthening of the justice system in Nigeria and wanted everyone to have access to justice, especially the criminal justice system.

On her part, Chief Registrar, FCT High Court, Hadiza Mohammed, said that the project would help in achieving efficiency in courts.

She commended the US for spearheading and sponsoring the project adding that it would help in the FCT judicial system.