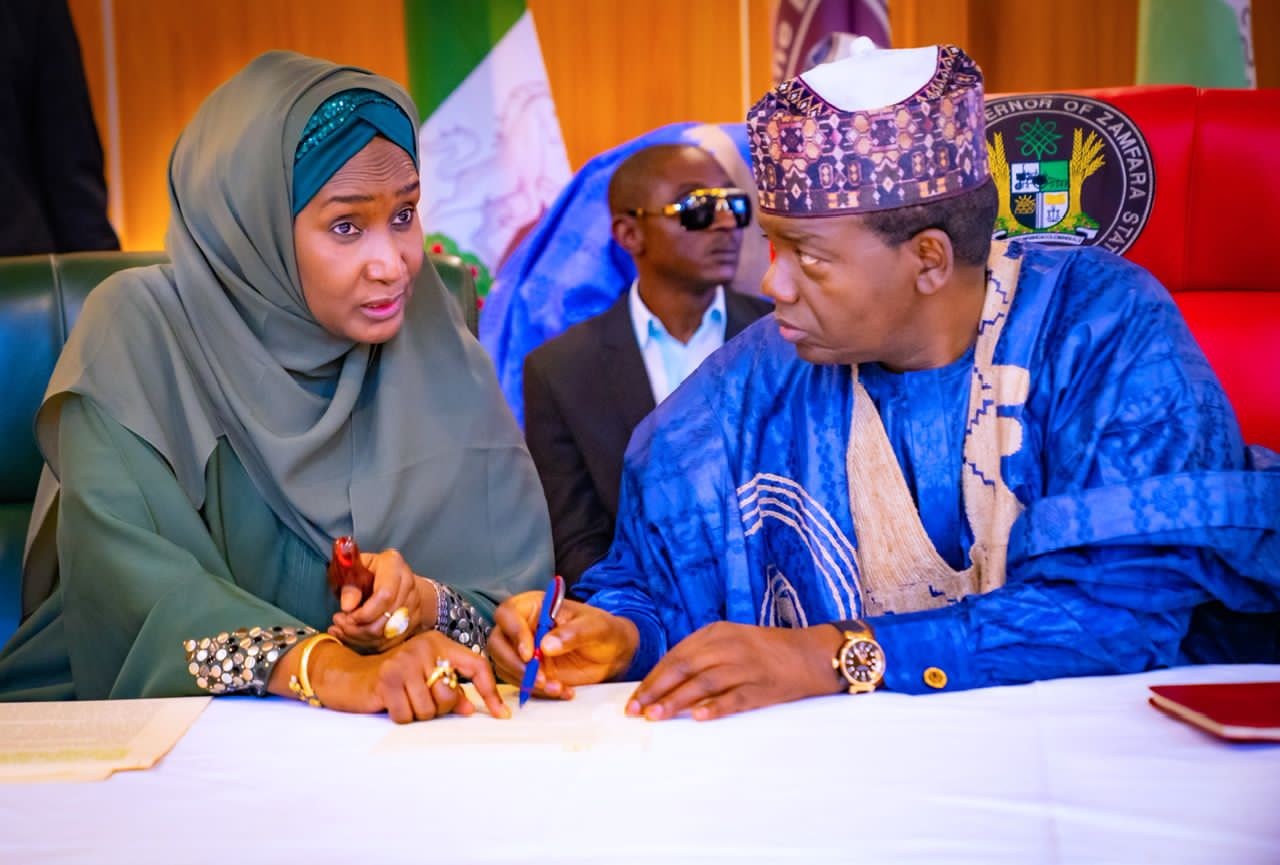 Governor Bello Muhammed Matawalle of Zamfara state has eulogised the Minister of Humanitarian Affairs, Disaster Management and Social Development Sadiya Umar Farouq as a worthy daughter of the state.

Special adviser on media to the minister Nneka Ikem Anibeze in a statement issued in Abuja quoted the Governor to have made the remarks at the flag-off of the Cash Grant for Vulnerable Groups held at the Council Chamber, Government House Gusau on Tuesday.
Gov Matawalle enumerated the benefits accruing to his state as a result of the National Social Investment Programmes as he lauded the Minister and President Muhammadu Buhari for their efforts in alleviating poverty in the country.

“The Minister has consistently proved herself to as a worthy daughter of our state. This is notably evident through the series of federal government intervention programmes under her ministry, which our state has immensely benefited from.
We have also seen this through her friendly disposition to this administration at all times.

“I understand that the minister is in Zamfara state to distribute food and non food items to Internally Displaced Persons, flag off the Conditional Cash Transfer and Cash Grants to Vulnerable Groups, distribute employment letters to Independent Monitors and also give interest free loans to farmers and market women.

“These endeavours are bold steps to mitigate poverty and economically empower our people. The present economic situation in the country requires concerted efforts by the government at all levels. This intervention is coming as a compliment to the state
government’s numerous efforts in providing relief and succor to the people of the state”.

In her address, Minister Umar Farouq announced that the Ministry will disburse Cash Grants for Vulnerable Groups to 4,728 beneficiaries across the 14 Local Government Areas in the State while 4,616 beneficiaries have been verified and enumerated to receive Government Enterprise Empowerment Programme interest free loans ranging from N50,000 to N300,000.

The Minister also flagged off the National Sensitisation Exercise for the National Home-Grown School Feeding Programme and on-boarded 130 Independent Monitors amongst other projects.

In Zamfara State, 800 beneficiaries including Persons with disabilities and senior citizens will be granted a one-off token of N50,000.
The Minister later visited one of the Camps for Internally Displaced Persons to distribute food and non food items, she also launched a school library and distributed utensils to pupils under the National Home Grown Feeding Programme.