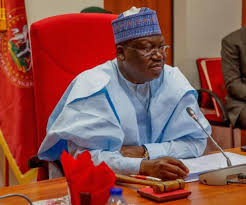 “Only recently, the president gave a marching order to the armed forces to extinguish bandits, kidnappers and other criminal agents against the state and her citizens, by December 2022. This administration is committed to achieving this set target.

“Accordingly, the past few weeks have seen security agencies flushing out terrorists from their hideouts in Kaduna Birnin-gwari axis, Katsina, Zamfara and Sokoto.

“Similar results were recorded in Niger, where, like in Kaduna, the Nigerian Airforce neutralised many terrorists.”

According to him, the National Assembly in its bid to continually support the effort of the government to tackle insecurity in Nigeria, ensured an improvement to annual appropriation for defence and security.

He disclosed that the legislature, while looking into the possibility of unmasking the perpetrators of insecurity in Nigeria, realised the need for an anti corruption law to stop illicit financial flows suspected to be funding routes for insecurity in Nigeria.
“The 8th Assembly passed the Nigeria Financial Intelligence Unit (NFIU) Bill, which is one of the major anti-corruption laws that saved the country from being expelled from the global body of the Egmont Group.
“In the same vein, the 9th Assembly, working closely with security and law enforcement agencies to further strengthen their capacity to withstand unscrupulous elements involved in criminal and terrorist activities against the state, passed three bills aimed at combating money laundering, terrorist financing and the proceeds of crime.
“These three bills are in tandem with this administration’s commitment to fight corruption and curb insurgency in the country”, he said.
Lawan observed that the alarming spate of insecurity scared away foreign and local investors and deprived Nigeria the benefit of attracting direct investments.
He, therefore, commended the efforts of the ICPC and its Research and Training Academy, ACAN, for convening the dialogue aimed at guiding the country’s policy direction towards addressing the security challenges.
“Indeed, this policy dialogue is showing us that to summarily deal with the ugliness of insecurity in Nigeria requires more than the deployment of military might.
“We must look at social and economic vices like corruption, that enable and even propagate insecurity.
“As lawmakers, we look forward to the eventual policy brief that will be shared hereafter to guide the nation’s policy direction in ending insecurity in Nigeria”, he said.
Others dignitaries present at the session include: Chairman of the ICPC, Prof. Bolaji Owasanoye; Minister of Interior, Ogbeni Rauf Aregbesola; National Security Adviser, Maj. Gen. Mohammed Babagana Munguno (rtd); and Chief of Defense Staff, Gen. Lucky Irabor.