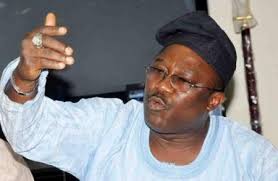 Senator representing Kogi West Smart Adeyemi who is also Chairman, Senate Committee on FCT has canvassed for owners of uninhabited but completed buildings in the Federal Capital Territory (FCT) to be compelled to pay property taxes.

Some buildings and estates in FCT have been completed for decades years, without occupants denying the FCT property tax.
Adeyemi spoke Wednesday in Abuja at a meeting with members of his committee.
Adeyemi, who was
Newly appointed Chairman of the senate committee on FCT at plenary on Sept 20 said the move has become necessary given the growing number of uninhabited residential buildings in FCT.
According to him, the property tax generated could be used further to develop the city.
Adeyemi, who said the committee would be a working committee noted that it was out to complement effort of the executive in further development of FCT.
He said based on the growing population in the FCT, there was need for the Federal Government to improve the budget of FCT, to enable it provide infrastructure for the residents and open up more districts in the city.
According to him, the N12.9 billion allocated to the FCT in the budget was inadequate,adding that the Federal Government must take issues of FCT seriously.
“For the road to be good,for good security,what is allocated to Abuja today is far below what is required of this developing city.
“So we call on President Muhammadu Buhari Before presentation of 2023 budget we want an improvement in the capital vote for the FCT.
Adeyemi said in the coming weeks, the committee would interface with all agencies under FCT adminstration and contractors handling various projects, saying that the committee would work to improve all it meet for the good of residents of the city.
He said given the insecurity in the nation,many Nigerians see Abuja as a safe haven.
This, he said was putting more pressure on available infrastructure, while appealing to Federal Government that FCT required more fund to improve infrastructure facility and guarantee safety of Nigerians.
Adeyemi said the committee would impress it on the Minister of FCT to make lands available to workers, civil servants who want to build houses in the FCT.
He said the committee would support the government to ensure the roads are good, security improved,social amenities provided and criminals chased out of FCT.