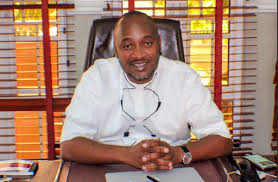 The Presidential Candidate of the African Democratic Congress(ADC), Dumebi Kachikwu, has advised members of the public to discountenance any statements emanating from the discredited former chairman of the ADC, Ralph Nwosu and his team.

Kachikwu spoke in reaction to an illegal convention conducted by the former chairman which purportedly granted him a fresh tenure of office after holding same position for 17 years.
The party has been enmershed in supremacy battle involving the embattled chairman and its Presidential candidate Dumebi Kachukwu.
Explaining further Kachukwu wondered how someone who only recently claimed he was granted a one year extension by a special convention at the end of August could now conduct another special convention in October for the same purpose. According to Kachikwu it is clear Nwosu enjoys conducting conventions having done so for the last seventeen years.

He further stated that the Senator Patricia Akwashiki led ADC would soon hold a convention to usher in a new set of executives who would lead the party to victory in the forthcoming 2023 general elections.