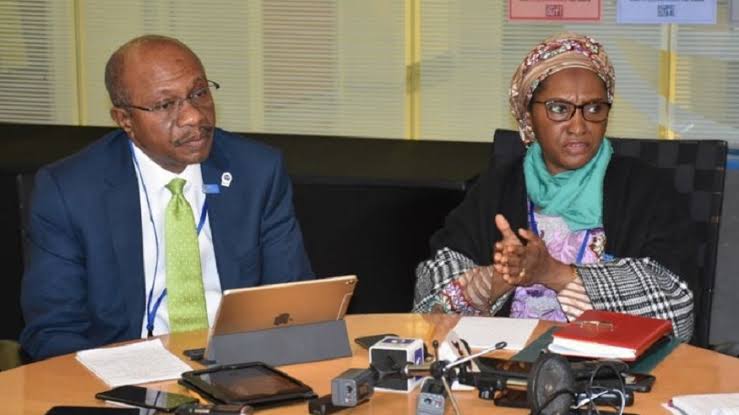 The Central Bank of Nigeria (CBN) has expressed dismay at the comments of the Minister of Finance, Budget and National Planning, Zainab Ahmad when she claimed she was not aware of such a policy to redesign the Naira

Barely two days after the CBN announced the move to redesign the Naira billed for December 15, 2022, the minister disowned the policy saying she was not aware of it
The Minister who was responding to question raised by Senator Opeyemi Bamidele (APC Ekiti Central) during 2023 budget defence session with  the Senate Committee on Finance warned the CBN of the consequences that may arise from it
However, the Apex Bank said it followed due process and the law in the ongoing redesigning of three series of the naira which is 12 years due.

Speaking with newsmen in Abuja, the spokesman of CBN, Mr. Osita Nwanisobi, said the CBN remained a very thorough institution that follows due process in its policy actions.

According to Nwanisobi, the Management of the Bank in line with provisions of section 2(b), section 18(a), and section 19(a)(b) of the CBN Act 2007, had duly sought and obtained the approval of President Muhammadu Buhari in writing to redesign, produce, release and circulate new series of N200, N500, and N1,000 banknotes.

The Spokesman therefore urged Nigerians to support the currency redesign project, noting that it was in their overall interest.

While alleging that some persons were hoarding significant sums of banknotes outside the vaults of commercial banks, he advised that the trend should not be encouraged by anyone who means well for the country.

According to him currency management in the country had faced several escalating challenges which threatened the integrity of the currency, the CBN, and the country, adding that every top-rate Central Bank was committed to safeguarding the integrity of the local legal tender, the efficiency of its supply, as well as its efficacy in the conduct of monetary policy.