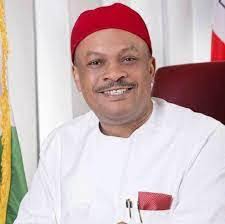 The People’s Democratic Party, (PDP) House of Representatives Candidate for Ideato North/South federal constituency, Ikenga Imo Ugochinyere has challenged the National Secretary of the party, Samuel Anyanwu to prove that he’s an honest person by resigning from his position as National Secretary.

Ugochinyere’s call followed Anyanwu’s statement in a recent interview that Governor Nyesom Wike of River State, is not fighting the party’s presidential and vice-presidential candidates, Atiku Abubakar and Governor Ifeanyi Okowa, but rather seeking for equity and justice.

He said Anyanwu is misleading Ayu for his selfish interest, hence should stop talking about Governor Wike, as he has been ungrateful to him.

He also said aggrieved members of the party are not against Ayu because of Wike, but his greed to hang on to power despite need for power balancing.

Ugochinyere while alleging that Ayu’s desperation to share remaining nomination fees is part of the desperation to hang on to power, as she lamented that his stay have made it difficult to market PDP in the South which may hamper the party’s chances of winning election come 2023.

He said, “the corruption and bribery allegation against Ayu have presented a huge credibility problem for PDP, saying that the resignation of Ayu will offer a new confidence in rebuilding the party.
“I have times without number appealed to Ayu and Anyanwu not to drag the image of the Party to the mud as cried out that PDP is facing a marketing challenges with Ayu still in office.

“Ayu’s refusal to convene a meeting of the party’s National Executive Committee to deliberate on the report of the reconciliation panel set up by the Board of Trustees is evidence that he is untrustworthy.
“Aggrieved members are not against Ayu because of Wike, but Ayu’s greed to hand on to power despite need for power balancing.”