11 persons burnt, 7 others injured in fatal multiple accident in Kogi 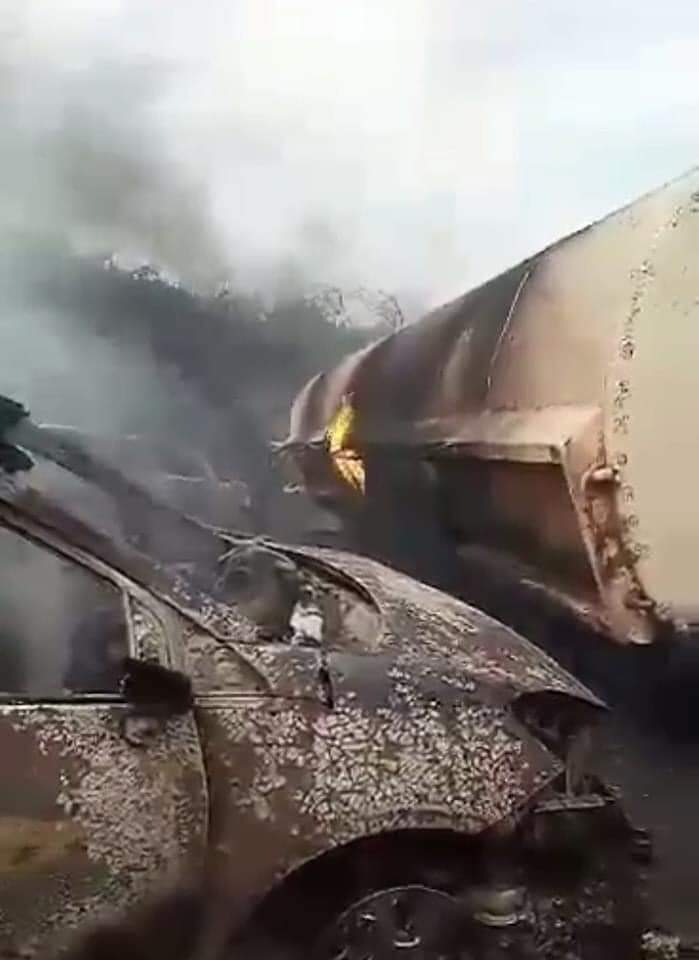 Eleven persons and 10 vehicles were on Thursday burnt to ashes in a multiple auto crash resulting from petrol tanker fire explosion which occured at Ochadamu village on Ajaokuta-Itobe-Anyigba highway in Kogi.

He said that seven persons were also injured while five motorcycles were completely burnt in the inferno.
Dawulung said that FRSC personnel that rushed to the scene of the accident were able to rescue some trapped comuters and the injured and rushed them to hospitals for medical attention.
“Already, six of the injured persons have been taken to Holy Memorial Hospital, Ochadamu while one was taken to the Federal Medical Centre (FMC), Ajaokuta, for medical attention.
“It’s very saddening that 11 persons died in these unfortunate road accidents that occurred at a spot due to human carelessness,” he said.
The sector commander said that the Corps had severally warned motorists to always check the road worthiness of their vehicles before embarking on a journey but they often turn deaf ears to the warning.
Dawulung described the accident as “very unfortunate” and “shocking” calling on motorists to always adhere to safety rules and regulations to avoid such carnage and wanton destruction of lives and properties.
According to an eye witness, issues leading to the accident started at about 3.00pm when a truck rammed into a stationary Sienna Bus at a Military check point due to brake failure and killed one person on the spot.
He said that as the personnel engaged the truck driver trying to sort things out, another truck driver took out his phone and started recording on video and this angered the personnel who seized the phone.
“Other truck drivers around protested and demanded that the phone be returned to their colleague without further delay,” he explained.
The eye-witness said that one of them (drivers) drove his petrol-laden tanker across the road, blocked the highway and swore never to move it away until the phone was returned to the owner.
Shortly after however, another articulated vehicle, loaded with Coal from the Easter part, also lost control due to brake failure and rammed into the tanker, which exploded in flames.
Vehicles on queue and others coming from opposite directions got engulfed in the inferno, leading to several persons getting burnt beyond recognition while others sustained injuries.