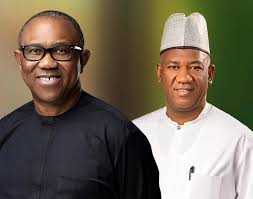 The Obi-Datti Media Organisation has expressed dismay over what it described as very disturbing news of the burning down of the Ogun State Independent National Electoral Commission (INEC) office which it recieved with utter shock.
A statement issued on Saturday by Diran Onifade Head, Obi-Datti Media Organisation the ogun incident was coming after similar one in Osun State earlier.

“It has been confirmed that many materials needed for the next year’s elections were destroyed by the inferno especially permanent voters’ cards yet to be collected by their owners.
“We condemn this arson in the strongest term possible because of the serious danger and threat it poses to the conduct of free, fair and credible elections next year.
He drew the attention of Nigerians to the fact that burning of INEC offices and materials has no compensatory benefit to the perpetrators of the heinous crime adding that it is purely a sabotage against the Nigerian nation, her people and her future.
Again he observed that most of the newly registered voters who showed unprecedented enthusiasm to participate in next year’s elections by trooping out en-masse to register have not collected their PVCs saying that they would be the worst victims of this sabotage.
The statement explained that those waiting to collect their PVCs are in millions and that if this ugly trend is not checked, Nigeria would have millions of voters disenfranchised.
He said there is a potent danger now that if the level of disenfranchisement occurs, the result of next year’s elections will not reflect the wishes of overwhelming majority of Nigerians.
“That it is obvious that the unpatriotic criminals planning and executing disruption of 2023 elections are those who have seen clearly that they will lose in 2023 if INEC continues to conduct free and fair elections.
He pointed out that the present threats to Nigeria’s continued existence as a peaceful and economically viable nation can only be solved if a popular and credible president is elected next year.
The statement urged the Federal Government to back its promise to conduct free and credible election in 2023 by protecting INEC staff, facilities and materials from destruction.
“The Government must also fish out the perpetrators of these arson and bring them to justice as a punishment and a deterrent.
The statement asked INEC to guard against rogue elements within its ranks, and its staff members who might have been compromised to carry out or abet such nefarious activities.