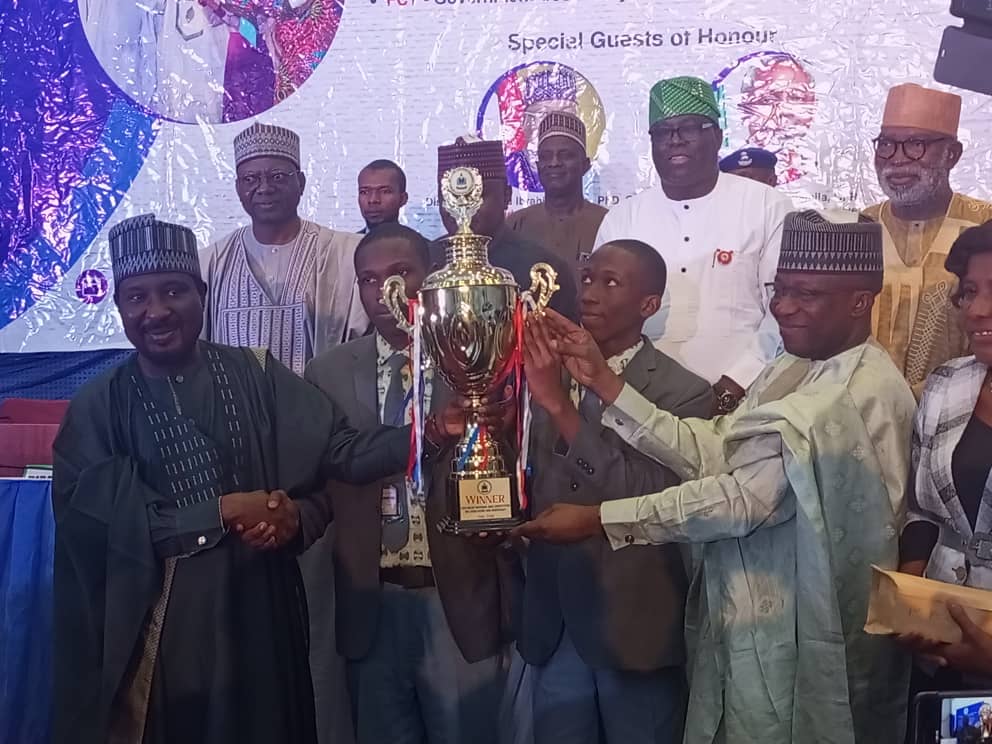 ***as President of the senate makes case for girl-child education

At the grand finale of the competition held at the National Assembly, Abuja Thursday Topfaith defeated six other secondary schools who were zonal champions from the six geo-political zones and the Federal Capital Territory (FCT), Abuja.

Lawan posited that educating the girl child is far better than empowering women as education is the best form of empowerment in life”.

An educated girl child, he added, will hardly be vulnerable at the stage of womanhood for the type of women empowerment programmes being carried out in the country today at various levels.

“If you want to empower women, you don’t do that only through organising city women and say they must have this and that, go back to the basis by giving the girl child quality education.

“Education of the girl-child is very important for any society or country that wants to be genuinely developed and I’m very happy that girls are well represented among the competing schools here today .

He observed that out of the seven participating schools, two are public schools while the remaining five are private schools, which he said tells the story that our “private schools are more successful”.

The Senate President, who is also the Chairman of the Governing Council of NILDS, advocated that “government must invest more in public schools”, adding that “education up to secondary school should be a must and free”.

“When you have people educated, they can take care of their health and they cannot join bandits and Boko Haram”, he said.

He also made a case for private schools to be supported by making some resources available to them since they are making significant contributions to the development of education I the country.

“I notice there is a good if girls here. That shows that if you want to empower women, you don’t to beg anybody, just educate them. This represents Nigeria of tomorrow where men and women join hands to build the country”.

The Director General of National Broadcasting Commission ( NBC) , Balarabe Shehu Ilelah in his remarks , said the content of the annual national quiz competition of NILDS which dwells on practice of democracy and in particular, the role of the legislature, should be amplified further through television programmes for children.

The NBC boss who was represented by Mrs. Clementine Usman Wamba , an Assistant Director in the agency , said thematic channels for packaging of such programmes are available .

“What NILDS is doing and aiming to achieve with the annual National Quiz Competition among senior secondary schools across the country on practice of democracy, should not stop at the various venues but transformed them into content that can be aired on television through any of the thematic channels”, she said.

Earlier in his welcome address, the Director – General of NILDS, Professor Abubakar Olanrewaju Sulaiman said the Nigerian Legislature is no doubt one of the most misunderstood arm of government , narrative of which is being changed with the instrumentality of the quiz competition.

“To this effect, NILDS is further encouraged to collaborate with research institutes and relevant agencies of government to develop curriculum on Legislative and Democratic studies for inclusion in the civic Education, Social Studies, Government and other curricular for basic as well as Senior Secondary Education to enrich their contents and bridge the knowledge gaps in the legislature”, he said.

The Chairman Senate Committee on Appropriations, Barau Jibrin, who represented Lawan at closing ceremony presented the trophy to the winners.

The Kano lawmaker also made a personal donated a computer to each of 14 participating students, two each from the six geo-political zones and the FCT, Abuja.