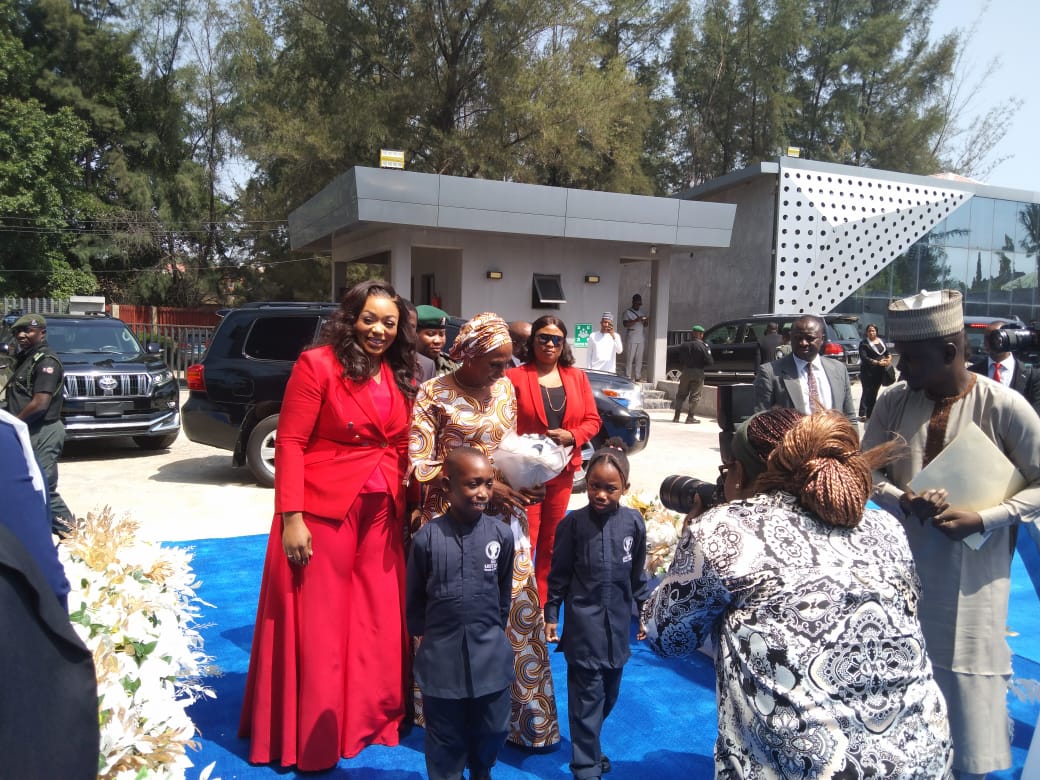 Meanwhile, the pupils of the Aretean School, Garki Abuja paid glowing tribute to Mrs Osinbajo, in their welcome message to the august visitor.

According to the pupils they said her birth and early childhood with Chief Obafemi Awolowo, one of the most celebrated politicians in the history of Nigeria made her learn so much about focus, humility and sacrifice for humanity.

“As a result of this experience, she grew up to become a celebrated humanitarian we all love today.

“Mrs. Osinbajo is the founder of 16 different Non-Governmental Organizations which she has used to touch the lives of many women and young children. One of her most celebrated works was her engagement and active participation towards the emancipation of many “street boys” in a notorious part of Lagos.

Her encounter with these children was chronicled in her famous book, “They call me Mama”, adding that Mrs. Osinbajo is also the Executive Director and founder of ‘Women’s Helping Hand Initiative’, a vocal organisation on women’s rights.

“The organisation, which was founded in 2006, has greatly imparted the lives of women in the areas of empowerment, mentoring, equality in the society, aids and rehabilitation.

According to them, in 2007, Mrs. Dolapo Osinbajo teamed up with her husband, Prof. Yemi Osinbajo, to set up Orderly Society Trust “to provide better education for children in public schools as well as to promote initiatives that support the rule of law; transparency and sccountability; patriotism and respect for civic obligation and etiquette”.

The pupils described her as “a benevolent philanthropist, an excellent leader, an outstanding woman of excellence, a subtle yet resounding voice of change and a mother to humanity”.

Proprietress of ARETEAN School, Mrs Uloma Rochas Nwosu while expressing her appreciation to Mrs. Osinbajo said the idea behind the school is the recognition of the increasing gap between Nigerian leadership and its people and the increasing lack of confidence between them because people constantly seeking better education outside the shores of this great nation.

“So, we decided to create a very comfortable environment that encourages our children to come back here and seek education so that they can imbibe our culture, foster the idea of patriotism, (love of country) to breed better leaders that understand our people.

“Once we provide that we will have better leaders for the country. If you look at the western world like the USA, UK, etc these people stay in their countries, educate themselves for their content.

“As Nigerians, we seek education elsewhere. So, there is a disconnect. The idea of Aretean is to breed  scholars that will lead the country in the future. That is why we pride ourselves as the emerging IV Living school that tends to train the next generation of leaders.

She expressed the hope that in the next five, ten years the Aretean will grow in numbers hoped to have their secondary section;.

“We intend to affiliate with very top universities here in Nigeria. It is beyond academics; it’s about culture of tolerance, respect for others.