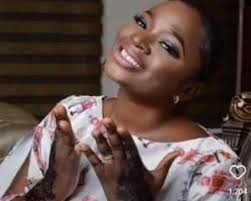 HURIWA also stated that there is a widespread insinuation whether wrongly or rightly that the said suspect-Mr. Ogbonna is allegedly a specialist in manipulation and emotional blackmail, warning the officials at the Ikoyi Correctional Center, and the general public against falling for what may as well be regarded as organised charade and his alleged antics on the way his late 35 year old wife, Bimbo died.

Bimbo, documented by some respected anti-domestic violence non governmental bodies and activists as a victim of Intimate Partner Violence, died after she reportedly sustained 95% burns in the house.
Ikechukwu as alleged, rather than rescue her opted to video record her inside their locked apartment.

Meanwhile, Mr Ogbonna who has been awaiting trial following his charge for negligence, remains in Ikoyi Correctional facility. Strangely, he has been allegedly observed changing his status, Display Picture (DP) on his social media handle and sending out tweets regularly.

In a statement issued by the National coordinator of HURIWA, Comrade Emmanuel Onwubiko, the Rights group condemned the fact that an inmate would have access to his phones and access his social media pages.

“Officials at Ikoyi Correctional facility must be probed. Why should they breach the security protocol by allegedly giving Mr. Ogbonna access to his phone in detention?
“We must not forget that even some Senior Advocates of Nigeria had recently raised alarm that there is a powerful cartel in the Federal Correctional Centers in Lagos responsible for switching real convicts with paid agents who would serve sentences passed on those who have the financial means to bribe to stay out of prisons.
“So if it is proven that an awaiting trial inmate is enjoying unfettered access to his social media handles, then it means that the prison system in the Country now stinks of corruption and ethical decadence” argues Onwubiko.

Onwubiko warned officials of the Ikoyi Correctional facility and the Nigerian public to guide against being victims of the alleged manipulative tendencies of Ogbonna from prison by his posts on his social media handles if these are actually discovered to be posted by him from his prison cell.

Ogbonna reportedly trended on social media last weekend where he lamented thus: “Not seen my kids, my Girls for a month and one week now. After hours, if I don’t speak or hear from my kids, am taking my life. Life is empty without my wife and kids,why am I still living. Guess it’s time to end it all”.

“Mr. Ogbonna is considered and accused by some observers of acting as a manipulator-in-chief and we all need to be careful, if indeed he turns out to be what some ovservers say he is. He’s allegedto be a master-manipulator, who thrives on emotional blackmail to get away with alleged domestic and Intimate Partner Violence (IPV). Evidence abound of how regularly he allegedly battered Bimbo and still allegedly manipulated her to return to him”, he stated.

“While his wife was being burnt to death, he was allegedly doing a live video recording of her calmly without calling for help and now he’s allegedly posting on Instagram from correctional center that he will kill himself all in a bid to whip up public sympathy. He may be in a move to allegedly want to manipulate us the exact same way he allegedly manipulated Bimbo. We must not succumb”, Onwubiko stated..