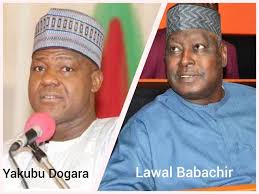 On December 2, Nigerians were told about the adoption of the presidential ticket of former Vice President Atiku Abubakar and Delta State Governor Ifeanyi Okowa for the General Election slated for February 25, 2023.
The endorsement by a Northern Leaders Consultative Forum wasn’t the usual “Breaking news,” as it’s long-expected, given the antics and theatrics of the promoters.
The members, baying for a backlash since a Muslim-Muslim presidential ticket emerged, set up a Technical Criteria Committee “to recommend a pan-Nigerian platform to adopt in the 2023 presidential election.”
Former Lagos State governor and candidate of the All Progressives Congress, Bola Ahmed Tinubu, provided the oxygen for the Forum when he chose former Borno State Governor Kashim Shettima, as his running mate.
The ticket particularly caused a stir in the North, with former Secretary to the Government of the Federation, Babacir Lawal, and former Reps Speaker, Yakubu Dogara, vowing to mobilise against it in the region.
Fiercely pushing the agenda, Lawal and Dogara found supports among the Christian and Muslim leaders in North’s 19 States and the Federal Capital Territory (FCT).
Yet, Lawal, seeming to break rank, later declared the Forum’s adoption of the ticket of former Anambra State governor and presidential candidate of the Labour Party, Peter Obi, and his running mate, Yusuf Datti Baba-Ahmed.
It’s unclear if Lawal’s trying to pre-empt or prevent the report of the technical committee, which he probably viewed as going against his preferred LP candidate Obi.
But some members quickly denied Lawal’s solo run, and promised “to unveil the true position soon,” which they did on December 2 in Kaduna by adopting the Peoples Democratic Party and the Atiku-Okowa ticket for 2023.
Surprisingly, most Nigerians have scant details about how the Northern leaders – exploiting religious sentiments – arrived at adopting the PDP and the Atiku-Okowa ticket.
Those details are contained in a communiqué, signed by Prof. Doknan DD Sheni and Mr Mukhtari Shehu Shagari, that the Forum issued at a meeting on December 2, at the Shehu Musa Yar’Adua Centre in Kaduna – and specifically held in the centre’s Atiku Abubakar Hall, named after the Northern leaders’ eventual shoo-in candidate.
The leaders had mandated the technical committee to “recommend, among the leading political parties and their presidential candidates, the ticket that represents our religious, ethnic and geographical diversities, capable of bringing about peace, unity, cohesion and inclusiveness.”
At the meeting, Dogara issued a statement, even as the committee presented its report – with both statements expressing bias against the APC Muslim-Muslim ticket.
Dogara said the APC’s adoption of a Muslim-Muslim ticket “doesn’t align with the vision of a united Nigeria, nor does it promote a collective sense of belonging,” adding, “what will destroy Nigeria is not ethnicity but religion.”
The committee’s report, signed by its chairman, Hon. Mohammed Kumaila and secretary, Nunghe Kele (SAN), and presented by former Kogi State Deputy Governor Simon Achuba, explained some of the criteria used in picking the party and candidate to endorse for 2023.
The parameters, weighted in a 15-point maximum score, are: presidential experience; requisite track record in public service, business and education; evidence of national penetration; religious and ethnic balance; reasonable popularity; and physical fitness.
Going by the report, Atiku of the PDP scored all 15 points; Rabiu Kwankwaso of the NNPP scored 10 points; while APC’s Tinubu and LP’s Obi got nine points each.
Not surprising, the report singled out the APC for excoriation. It said: “It is evident that the All Progressives Congress (APC) is heading for implosion and extinction; hence, it cannot be the party for now and in the future, because of its rejection to embrace inclusiveness in a diverse country like Nigeria.
“After the 2023 elections, APC may be dead and buried as a political party. While the duo (NNPP and LP) may emerge as strong contenders in the political arena in the future. From all indications, PDP appears to be the best option to adopt and support.”
As an afterthought, the report added a caveat: “The endorsement (of the PDP and the Atiku-Okowa ticket) is subject to assurance from the party to run an all-inclusive government” if it wins the February 25, 2023 poll.
So, displaying no qualms, the leaders bought wholesale the report of the committee – indicating unmistakably that they’d made up their minds on the party and ticket they desire and the one(s) to reject and denigrate.
For instance, the leaders didn’t cloak the real purpose for empaneling the committee, as its brief was to return a verdict of total rejection of the APC Muslim-Muslim ticket by northern Muslims and Christians.
The committee was asked “to consult among all strata of people in Northern Nigeria with a view to identifying the political party to support for the 2023 presidential elections. This was necessitated by the rejection of the same faith Muslim-Muslim ticket of the APC.”
Hence the leaders dismissed APC’s same faith (Muslim-Muslim) ticket for excluding “a large demography of Christians, who do not feel represented by the ticket.”
The leaders’ words: “The APC presidential ticket does not promote inclusiveness, unity, religious harmony and cohesion. A large population of Muslims have also expressed reservations to this ticket and have called for fairness and inclusivity.
“Consequently, this ticket is outrightly rejected by the Forum and the Forum hereby calls on all lovers of democracy, peaceful coexistence, unity and religious harmony to reject the ticket in its entirety.”
Undoubtably, the leaders’ aim was two-fold: Return a verdict of rejection of the APC presidential ticket by northern Muslims and Christians; and search for untenable excuses not to also support the NNPP and LP tickets.
And that leaves on the plate only the PDP and the Atiku-Okowa ticket! So, the leaders could’ve spared Nigerians the rigmarole of a “smokescreen” and straightaway endorse the PDP and its presidential ticket.
Next week : The communiqué by the Northern Leaders Consultative Forum, exposing how the members – after outrightly dismissing the APC and its Muslim-Muslim ticket – fished for flimsy excuses to eliminate the candidates of the NNPP and LP, and adopt and recommend the PDP and Atiku-Okowa ticket to Nigerians for the February 25 poll!