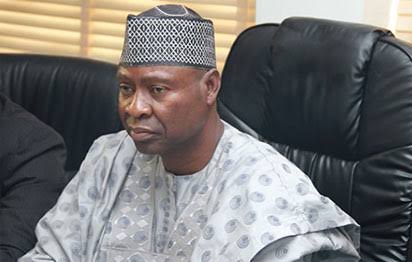 The Senior Staff Association of Induatrial Training Fund (ITF) has debunked corruption allegation making the rounds in the media against their Director General, Sir Joseph Ari describing it as spurious and malicious.
This was just as the association extolled the virtues of Sir Joseph Ari describing him as the best thing that ever happened to the Fund in recent times.
“Sir Ari is clear headed Leader that has maintained the principle of the federal character in all facets and has dutifully added value in terms of infrastructional development of the fund.
It indicated that the negative report by Sahara Reporters credited to a faceless group is not only false, but satanic in its entirety, saying

The senior Staff Association of Statutory Corporations and Government Own Companies (SSASCGOC), had earlier drawn the attention of Nigerians to an attempt by sponsored agents and media organizations to blackmail the Director General of the Industrial Training Funds ( ITF) sir Joseph Ari, while describing the publication as malicious.
The Association had raised the alarm in Abuja, on Friday following a malicious publication by SaharaReporters that serially linked the Funds to allegation of lopsided appointment and promotions in the ITF.

The secretary General of the Association Othman Balarabe, while reacting to the allegations at the press briefing stated that the reaction was coming on the heels of the publications attributed to a faceless group, a self-styled acclaim Northern Human Rights Group( NHRG) by an online publication (Saharareporters)
“The attention of the two workers’ Unions in the Industrial Training Fund (ITF) – the Senior Staff Association of Statutory Corporations and Government Owned Companies (SSASCGOC) and Amalgamated Union of Public Corporation Civil Service Technical and Recreational Services Employees (AUPCTRE) – have been drawn to the above publication that was published on the website of Sahara Reporters on 8th December, 2022.

The story which is attributed to a faceless group the Coalition of Northern Human Rights Groups (NHRG) was based on a protest letter by the – group, to the office of the Minister of Trade and Investment (Sic), alleging lopsided appointments and monetization of the promotion process, fraudulent awards of contracts, mandate deviation, nepotism and outright diversion of public funds, against the DG and Management of the ITF.”

“While it is not in our place to hold brief for the Director-General and Management, who are quite capable of defending their integrity that is clearly being assailed and tarnished, we, as representatives of the entirety of the ITF workforce are constrained to react to the malicious publication whose purpose is to sow seeds of discord while appealing to Nigerians and stakeholder to cross check their fact at the various offices of the ITF.

“It must equally be placed on record that the House of Representatives’ Committee on Industry, during an oversight function visit to the Fund commended the Director-General
and Management of the Fund for industrial harmony as well as for achieving so much in the face of paucity of funds.

They asked that the report should be discountenanced, as it is a tissue of lies and untruth that have no basis in fact. “As a responsible media organisation, Sahara reporters should have done well by cross checking the information they got from what is clearly a faceless and non-existent organisation to cause discords and cause disaffection within the Fund.

“This is based on our firm understanding of the operations of the Fund, our deep appreciation of what the DG has done since his appointment in 2016 and the implication of the story on the image and reputation of our dear institution. In view of the above, we as the executive officers of the two unions wish to react as follows:
“On the allegation of ‘nepotism, lopsided appointments and promotion of workers and monetization of the processes’ the NHRG and Sahara Reporters are merely trying to ‘give a dog a bad name in order to hang it’ because since the assumption of office of the DG, the ITF has operated transparently and in keeping with his pledge to heal wounds and work as unto God in the discharge of his duties.
“Therefore, every activity, be it employment, promotions and appointments and others have followed due process which accounts for the industrial harmony that has prevailed in the Fund since his appointment. With regards to the recruitments that Management conducted some years back, it was obvious to everyone associated with the ITF, even before his assumption to office that the Fund was short-staffed owing to retirements and other sundry reasons.
The DG, therefore, commenced the process of recruiting staff to plug the gaping manpower gaps in a transparent process that involved the Federal Character Commission (FCC), the Federal Ministry of Industry, Trade and Investment, and the ITF Governing Council.
“It is is, therefore, preposterous that several years since the recruitment exercise, the DG would be accused of ‘lopsided appointment and bias recruitment’ as if he had sole responsibility for such an exercise, or rode roughshod over the other parties to populate the Fund with ‘indigenes of Plateau State and environs’ as the story suggested.

“Indeed, instead of the suggestion of ‘running the agency as his private estate with the bulk of recruitment into the agency reserved for indigenes of Plateau State and environs,’ the ITF was commended by the Federal Character Commission for adherence to laid down processes in the recruitment exercise.
“There is nothing that suggests the desperation of the medium to impugn the name of the DG than the assertion of “promotion in the agency has been monetised and, in most instances, based on religious and ethnic considerations”.
“As staff of the Fund, we wish to state that the promotion exercises are conducted with the supervision and active participation of the supervising Ministry and the Governing Council based on clearly defined parameters in line with the Civil service rule and condition of service.
The transparency of the Fund’s promotion exercise has been further enhanced by the introduction of the Computer Based Test (CBT) under the leadership of Sir Joseph N. Ari.
Having witnessed the process of our promotion exercise, the FMITI adjudged our exercise as one of the best and therefore, directed the Fund to prepare a template that will be adopted by other agencies under the Ministry.
“Consequently, the issue of lopsided appointments alleged by the publication is not only mischievous but equally satanic and devilish.
Interestingly, the last recruitment made by the Fund was in 2019, and the necessary approvals were obtained, and the quota system was duly followed as in accordance with the directive of the Federal Character Commission.
From 2019 to date, no other recruitment.”
“We, as the Unions, will be first to complain should there be any attempt to subvert the process in favour of others. Anybody familiar with the ITF will testify that the ITF Unions are reputed for their activism.”
“Regarding allegations of ‘fraudulent award of contracts in the Fund, without recourse to the civil service rules (Sic)’, we state without fear of contradiction that all processes concerning the award of contracts in the ITF are followed to the letter.
“Dor a medium that hypes its investigative journalism credentials, we are amazed that it did not cite any instance of such alleged infractions. Indeed, because of the transparent adherence to procedures and due process in its affairs, the ITF was ranked amongst the first from over 500 agencies of the Federal Government that were surveyed in 2020 in terms of service delivery, transparency and integrity.”
“It is equally spurious and quite laughable that a man that is described by most stakeholders’ as ‘the architect of Modern ITF’ and ‘Mr Infrastructure,’ who has virtually transformed the ITF both in terms of its ability to actualise its mandate and physical infrastructure is being accused of ‘outright diversion of funds and mandate deviation’.
“It is public knowledge that since the assumption to office of the Director-General, he has initiated several skills Acquisition programmes that have equipped thousands of Nigerians with relevant technical skills, who were empowered with start-up kits to start their businesses.
“It is equally on record that since his appointment in 2016, the DG has completed and commissioned over ten projects namely: The Mechatronics Workshop and Administrative Block at the Industrial Skills Training Centre.”