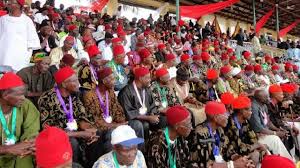 A group operating under the aegis of World Igbo Union, has taken the Ohaneze Ndigbo to the cleaners over what it described as a sacrilege the tagging of one of the illustrious son Simon Ekpa as ‘persona non grata’ to Igbo land.

The apex Igbo Organization in the world in a statement on Tuesday by its leader Mazi Ogechukwu Nkere which was made available to newsmen in Abuja, said such call was not only sacrilegious, but also an abomination and frivolous in the face of hundreds of Southeasterners being murdered by marauding Fulani terrorists and Boko Haram in Nigeria without any measurable reaction by Ohaneze Ndigbo to stop the killings.

The statement reads: “The attention of the apex Igbo Organization in the world – The IWorld Igbo Union has been drawn to a sacrilegious publication credited to a moribund organization in the name of Ohaneze Ndigbo seeking a bounty on the head of one of their illustrious sons, Mazi Simon Ekpa in a publication on This Day Newspaper of 1/23/2023.”

He indicated that the Ohaneze has not reacted in strong or measurable terms or issued any active statement to condemn the killings by the terrorists in Southeast Nigeria.

The group which comprises of over 50,000 members of Igbo descent across the world declared the ohaneze ndigbo as a dead and wasted organization that has remained irrelevant in the lives of the average Igbo person in Nigeria.

The group rules out Ohaneze Ndigbo as inconsequential and lacking capacity to decide for over 70 million Southeasterners and Biafrans that are cut across the Southeast Nigeria begging daily to live from the horrors of terrorist invaders imported into Nigeria by the current Nigeria leadership aided by Ohaneze.

The statement declared the group’s total and unwavering support for their illustrious son in the person of Mazi Simon Ekpa who has been exposing the ills and havoc that Fulani terrorists have been wreaking in all parts of Nigeria including the killing of Christians, burning of homes and markets and more recently, the killing of the Catholic priest father Achi in Kaduna State Nigeria.; this killing has been condemned by the United States government and the Vatican.

They said: “One of the major position and factors that will reduce terrorism in Nigeria and in extension the western world would be an immediate call for an independent Referendum by the United Nations in Nigeria.”

According to them, the dangerous diversities in Nigeria in areas of tribe, religion, ethnicity, language and culture, coupled with the corrupt leadership and their destructive policies has created lots of insecurity and deaths in the Country.

“The inability of the government to obey court orders especially in the case of the release of Mazi Nnamdi Kanu (the leader of Indigenous People of Biafra) of whom Mazi Simon Ekpa is an ardent follower despite the United Nations call for his immediate release and compensation.

It will be recalled that Mazi Nnamdi Kanu whose disciple is Mazi Simon Ekpa has been discharged and acquitted by almost 3 independent courts in Nigeria and also by the United Nations committee on extraordinary rendition.

The World Igbo Union leader used the medium to call the attention of the world leaders, INTERPOL, and leaders of thought and inform them that the Ohaneze Ndigbo group has been rejected by majority of Igbo citizens because of their role and silence on the killings and destruction of properties and means of livelihood of Igbo citizens in Southeast Nigeria.

“The moribund Ohaneze Ndigbo has committed sacrilege in Igboland by placing a $50,000 bounty on the head of an innocent and illustrious son of Igboland whose only crime was calling for the freedom of his people and their self-protection from Fulani terrorists that have invaded Southeast Nigeria.

“These terrorists has wreaked havoc in Ehamufu Enugu state where over 200 innocent men, women and children were massacred in their own land without protection from either the state or federal government, In fact a Sahara newspaper report on December 24th, 2022 enumerated how the Nigeria military masterminded the Ehamufu killings of these innocent citizens.

“The Nigeria government has daily rehabilitated and reintegrated known terrorists into the country’s security forces and use them to kill, maim and burn down innocent peoples homes and businesses especially those that condemn this practice and seek for their freedom from Nigeria.

“The World Igbo Union hereby calls on the international body, INTERPOL and Nigerians to disregard the sacrilegious call by the moribund Ohaneze Ndigbo and its Secretary Okechukwu Isiguzoro.

“The group declared its unflinching support for its erudite scholar and illustrious son Mazi Simon Ekpa whose expositions have created lots of awareness to citizens from the Southeast Nigeria on ways to mitigate and protect themselves against Fulani terrorist invaders.

It described Ohaneze Ndigbo as a stooge of the Fulani terrorist government in Nigeria whose actions have led the United States embassy to order families of embassy employees to depart Nigeria due to heightened risk of terrorism in October 2022.
Read Also: Magu grilled at banquet hall of Presidential villa as journalists are barred from gaining entrance