Obi at Alma Mater, UNN, cautions against voting for a sick president 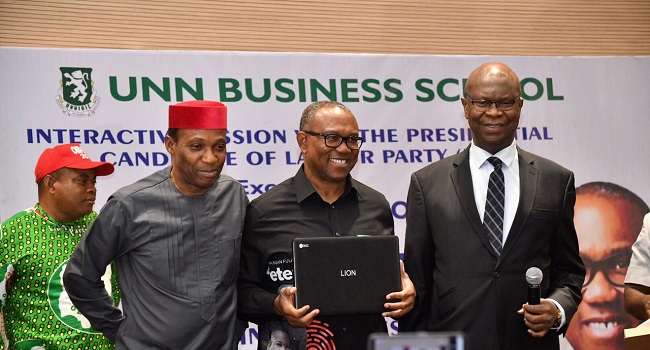 Labour Party Presidential Candidate Mr. Peter Obi on Thursday took his campaign to his alma mater, the University of Nigeria, Nsukka, (UNN) in Enugu State where he cautioned Nigerians against handing over a sick country to a sick man.

Obi had interacted with the UNN business School and other egg heads of the great institution when he raised a point of concern that Nigeria is sick and should not be handed over to a sick person.

“I am not saying that anyone is sick. We have been here for over two hours, we don’t want people who can’t stand for 30 minutes”

To avoid plunging this country into further mess, he asked Nigerians to watch out for character and trust in the recruitment era pointing out that the identity of whoever wants to lead this country must be thoroughly examined with nothing to hide.

pushing to lead everybody”

The former Anambra state Governor said that what we need for the job of Nigeria President is character and people we can’t trust.

“My name is Peter Obi, I can say I went to CKC, went to University of Nigeria, Nsukka. Both the VC today, the DVC today, these are my school mates. We came into University the same year and left the same year. The people I went to school, I can see them here today, my seniors and my juniors. How come we now have people who do not have classmate. This is very important”

The LP standard bearer said that everybody shouldn’t have to go to formal education but their record must be straight. “Afe Babalola once told me he never had the opportunity of going to a formal school. There is nothing wrong in that. There are so many people who have done well in life and never went to formal school”.

Obi spoke on the issue of corruption and Nigerians should watch out for person’s antecedents not on what they claim they will do. “If you said you will fight corruption, let’s go to the road you have passed and see what is remaining there after you left”

He reiterated his earlier position that, “this year’s election must be based on competence as it requires physical and mental energy, not a retirement job.”