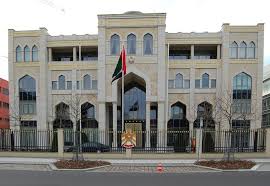 The United Nigerian Stakeholders in the United Arab Emirate- an umbrella body of enterprising Nigerians who live and do business in Dubai has condemned reports in an online media alleging refusal of the government of UAE to renew work permits for Nigerians in the country.

The stakeholders particularly frowned at attempt by the said media reports to heap blames on the Consular General, Mrs. Tayyibat Atinuke Mohammed, who the diaspora group said has performed excellently.

A report in one of Nigeria’s online media platform credited to a certain Chidi Nwanyanwu who claimed to be a Spokesperson of the Take-It-Back Movement had condemned the refusal of the government of United Arab Emirates to renew work permits for Nigerians in the country.

But responding to the allegation through a statement sent to newsmen on Tuesday and signed by its President Hon. Auwalu Rabiu and Secretary, Ishola M. O, the UAE group urged “our workaholic Consul General not to be deterred by such rather mischievous publications targeted directly at her person and not premised on facts and issues.”

While condemning the online reports, the statement explained that “As an organisation whose members live and do businesses here, we are duty bound to clarify that the UAE is a society governed by laws and does not tolerate any form of criminal indulgence.
“This largely explains why many rich men and women from our country home, Nigeria prefer UAE as its first travel destination.
“We as citizens and residents of UAE cannot therefore change the laws of the land that has given us economic means, hope and succour as we remain law abiding to suit those with criminal mindsets.”
“As fellow Nigerians dwelling, working and doing businesses in the UAE, we wish to clarify that we are not oblivious of the issues pertaining to work permits for our dear brothers and sisters and particularly the efforts being made by the Nigerian Consul General to the UAE, Mrs. Tayyibat Atinuke Mohammed.

“That the Consular General has been working round the clock to ensure that regular migrants in the middle East country are united and have a conducive environment to perform their daily legal businesses.
“While we strongly condemn the statement issued by the said innocuous organisation priding itself as the Take-It-Back Movement and the very fact that the online media organisation which published the said report was whimsically unprofessional to the point of forgetting its earlier acclaimed investigations it published on the matter in their desperation to heap all the blames on the doorsteps of the Consul General.
“We honestly urge our workaholic Consul General not to be deterred by such rather mischievous publications targeted directly at her person and not premised on facts and issues. We demand them to retract the said obnoxious publication and kindly apologise to the Consul General as a matter of fact and urgency.

“Finally, Mrs. Tayyibat Atinuke Mohammed, since her appointment has indeed brought many innovations on board which afforded Nigerians doing businesses in UAE the grand opportunity for business interactions and economic interests cum values for both countries and particularly to our own benefits.
“We therefore pass a vote of confidence on her office and appreciate her enormous capacity as we further urge her to continue in her good works and efforts to see that the work permit problems are amicably resolved and our brothers and sisters’ places and pride restored.
“It is also wisdom on our path to urge our brothers and sisters to remain law abiding and legitimate in their dealings here in UAE.
“They should always remember as they say in Nigeria’s local parlance, that when one finger deeps into the oil bowl, it definitely affects the entire fingers!”
The statement acknowledged that some Nigerians have indeed lost their jobs due to a non-renewal of work permits by the UAE government, “we do not consider it wise for a rather uninformed group or organisation to begin to cast aspersions and heap all the blames on the doorstep of the Nigerian Consul General, Mrs. Atinuke Mohammed who has rather been working extremely hard since her appointment not only to unite Nigerians in UAE but also resolve any conflicts involving Nigeria and its citizens and the United Arab Emirates government.”