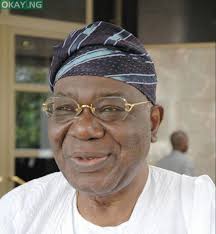 The Senate has urged the Federal Government to immortalise Chief Ernest Shonekan, Former Head of Interim National Government of Nigeria, who died on Jan.11 at the age of 85.

Senate resolution was followed the adoption of a motion on the demise of the Nigerian Former leader.

The senate leader Abdullahi Yahaya (APC- Kebbi) who sponsored the motion while making his presentation noted with grief the demise of Shonekan on Jan .11 at the age of 85.

He said, Shonekan,an indigene of Ogun State, was a British trained lawyer,consumate administrator, renowned industrialist, a seasoned businessman and politician.

He said Shonekan served as the Head of Interim National Government of Nigeria from August 26 1993 to Nov 17,1993.

He noted that three months into his administration, Shonekan was overthrown in a palace coup by late Gen.Sani Abacha on Nov.17,1993.

He said athough, Shonakan served briefly, his contributions to national development, unity, cohesion and stability were worthy of note in the annals of Nigeria.

According to Yahaya, Shonekan, thereafter featured prominently as a cherished Leader and a respected Elder Statesman,who epitomised service to humanity and the nation.

He said Shonekan was a selfless Nigerian, who dedicated his life to the growth and stability of Nigeria as evidenced in his public and private life.

The President of Senate, Dr. Ahmad Lawan, while paying tribute to Shonekan, said the late elderstates man was a symbol of unity who unified the nation during his short time as Head of Interim National Government.

Other Senators, who paid glowing tribute to Shonekan at plenary included:

Senate also observed one minute silence in honour of Shonekan.

It also resolved to send a delegation to condole with the Shonekan family, the Government and people of Ogun state.