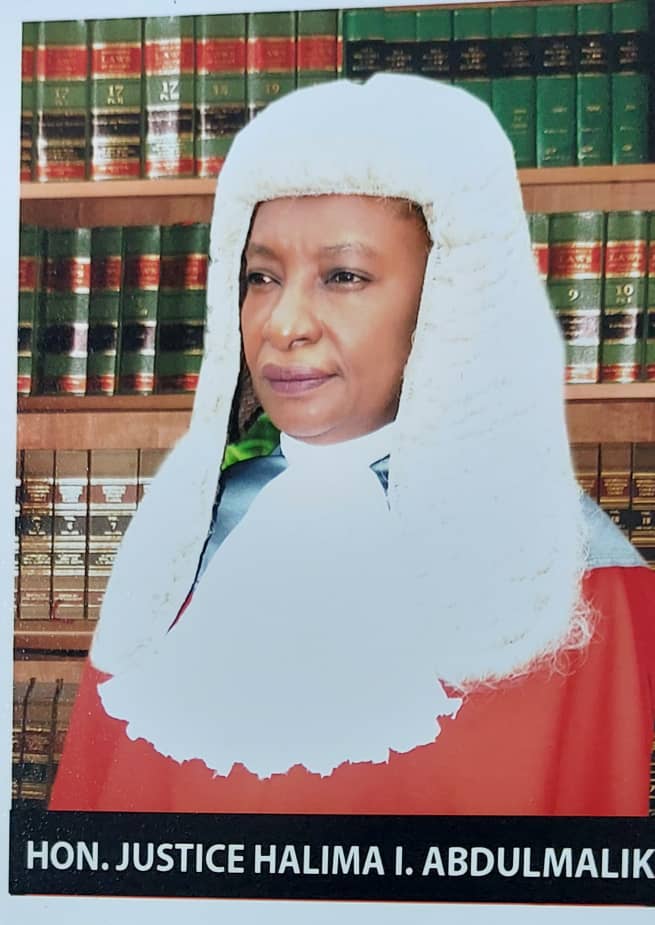 Governor Abubakar Sani Bello of Niger State has eulogised immediate past Chief Judge (CJ) of the State, Justice Lami Bawa Bwari describing her as calm and meticulous in all she does.

The governor gave the indication at the Valedictory court session in her honour and the swearing- in of the Acting Chief Judge Justice Halima Ibrahim Abdulmalik, held at the High Court of Justice, Minna.

The Governor at the valedictory session, said “Justice Bwari has done well, she consolidated on all the achievements made by her predecessors, we are surely going to miss her”.

On the challenges faced by the Judicial arm of government, Governor Bello explained that addressing the challenges is a continuous process saying he will not relent in doing so.

To the Acting Chief Judge of the State, the Governor said he has no doubt that she will do well as she is upto the task.

“I have worked with her for some times, she has chaired some of our committees, I’ve given her some responsibilities which she did very well”, he said.

In her valedictory address, the immediate past CJ Justice Lami Bawa Bwari, said the knowledge she acquired having worked in different capacities in the Judiciary and the support she enjoyed from the government and other administrative staff, helped her carried out her task smoothly after building on the legacies left by her predecessors.

She highlighted some of her achievements as construction of new courts in Kontagora, Sabon Daga and Gbara, remodeling of Magistrate Court to a befitting Hight Court in Kontagora, renovation and maintenance works, appointment of High Court Judges, Khadis and Shari’a Judges as well as clearing backlogs of promotion of staff from 2016 to 2021 among others.

Justice Bwari however said the Judiciary is not without some challenges which she said include lack of adequate funds; medical and vacation allowances for Judges; total renovation and fencing of some courts; as well as shortage of office accommodation at the Judicial Service Commission.

In her remarks, the Acting CJ of the State, Justice Halima Ibrahim Abdulmalik acknowledged that the former CJ Justice Bwari has paid her dues through diligent and loyal service to the state for more than four decades adding that she deserves to rest.

Justice Abdulmalik said her immediate predecessor in her capacity as a Judicial officer has distinguished herself while as a memeber of the Bar and on the Bench, pointing out that the former CJ had presided over hundreds of matters and delivered well thought out judgments that stood their grounds at the appellate Courts.

“She was known to be an expert on election matters and presided over many election tribunals, she is an encyclopedia on matters of law, ardent supporter of the rule of law, an excellent manager of public funds.

“Indeed My Lord has paid her dues and it is time to break new grounds. We pray My Lord will not be tired to share her wealth of experience with young and upcoming juries and will willingly offer herself to assist the Judiciary”, she said.

The Commissioner for Justice and Attorney General of the State, Nasara Dan-Mallam, representative of Senior Advocates of Nigeria Ibrahim Isyaku, Chairman of Nigerian Bar Association Minna Branch, Mohammed Abubakar El-saru and Chairman Magistrate Association of Nigeria, Hauwa’u Baba Yusuf in their separate remarks eulogized the former CJ for her meritorious service to the state.

The immediate past CJ Justice Lami Bawa Bwari was the 8th Chief Judge of the State and was born on the 27th of February 1957.

The former CJ started her career from 1976 and rose through the ranks to the positions of Chief Magistrate, Assistant Secretary Judicial Service Commission,  Chief Registrar Niger State High Court, Solicitor General/Director General State Ministry of Justice and Judge of the High Court among others before her elevation as the Chief Judge of the State on the 23rd of October, 2020.