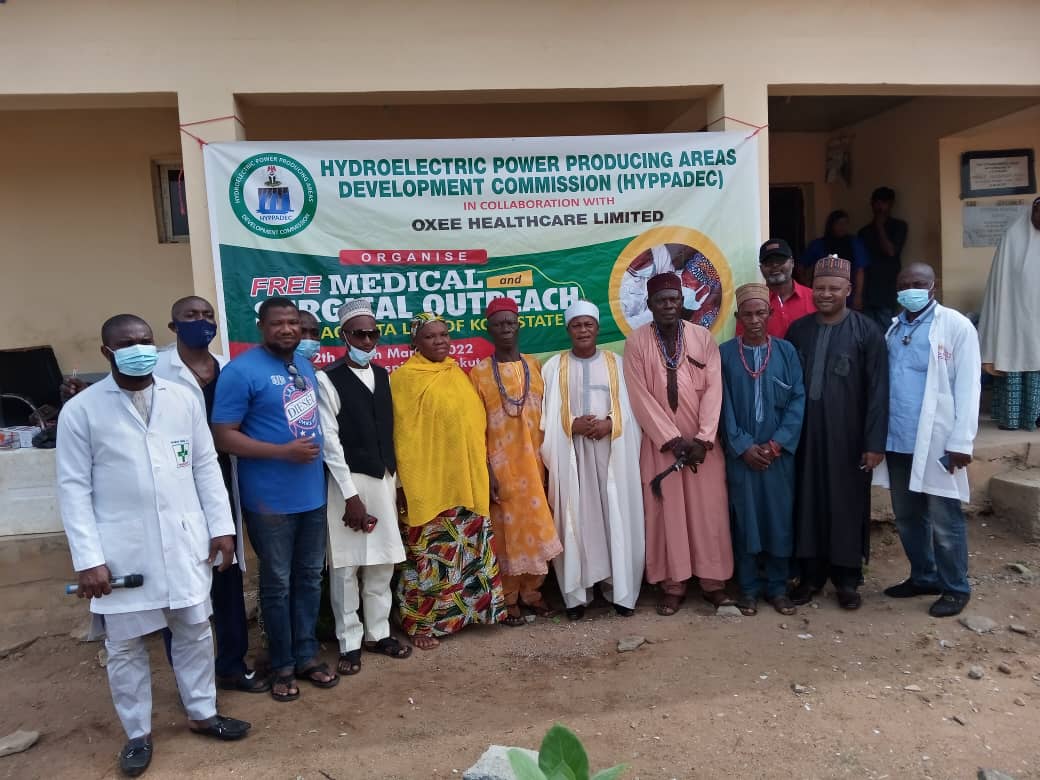 The outreach which began on Saturday, March 12 in four Local Government Areas of Bassa, Ibaji, Koton-Karfe and Ajaokuta of Kogi, ended Tuesday, March 15.

Managing Director (MD) of HYPPADEC Dr Abubakar Sadiq Yelwa, disclosed this in Adogo, Ajaokuta Local Government of Kogi as the first phase of the medical intervention to the flood devasted riverine communities came to a close on Thursday.

Yelwa who was represented by Mr Jimoh Haruna Gabi, Director Admin and Finance in the Commission said provided for 1,000 persons from each of the the four local councils.

“In each of the Local Governments we go, we have budget for about 1,000 patients to be attended to.

“That is to tell you that we expected 4,000 beneficiaries in the four Local Governments that we have accommodated in the first phase because the second phase is coming very soon to attend to all these.

“When the team came, we discovered that the intervention met the need of the people. Honestly, the acceptance of this outreach is tremendous. People are even yearning for more.

“In Koton-Karfe yesterday, they told us some of the services they felt should be dispensed that were not made available like testing people for Hepatitis B and C and we immediately made provisions for them.

“The next phase will see us coming with more medical personnel and facilities to help cater for the masses who could not afford medical treatment for the various ailments eating them up without remedy considering their poor economic conditions”, the Managing Director said.

Yelwa noted that the problem was that of dearth of health facilities in rural communities especially, the riverine areas and where available, the cost of accessing the facilities was beyond their capacity.”

Also speaking, Mr Lee Ahenjir, Kogi State Coordinator of HYPPADEC said the relevance of the Commission’s intervention could not be overemphasized as when flooding and ecological issues impact the society, one of the first casualties would be access to health.

Ahenjir stressed that the responses that greeted the HYPPADEC medical outreach scheme from members of the communities had been very impressive showing that it had been a long overdue.

On how soon the second phase of the intervention would be, the Coordinator said, “Soon. It’s a quarterly programme and this is the first quarter. By next quarter there will be another scheme.”

Alhaji Isah Musa-Achuja, the Ohi of Eganyi and Chairman, Ajaokuta Area Traditional Council, said his community and subjects had seen and felt the impact of HYPPADEC through the free medical outreach and other programmes.

Musa-Achuja said, ‘Today, our people are better off in terms of health, potable drinking water, electricity and education. We don’t know how to thank HYPPADEC. If Ministries and other commissions were doing what you are doing, things would have been better.

“We are so grateful to President Muhammadu Buhari, who deemed it fit to inject life into the commission 10 years after its establishment. It’s touching lives and raising hopes in people across the country,” the monarch said.

Most of the beneficiaries spoken to described the HYPPADEC medical intervention as ‘God sent very timely” in view of the prevailing health and medical situations in the riverine areas as a result of the perennial flooding and its health hazards.