Success of APC Convention is Sign of greater Victory ahead, says Nasarawa Speaker 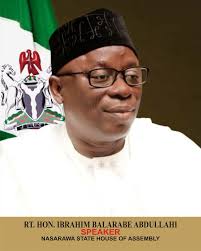 Speaker, Nasarawa State House of Assembly, Mr Ibrahim Balarabe Abdullahi, has described the success of the All Progressives Congress (APC) convention that ushered in Sen. Abdullahi Adamu as National Chairman and other National Working Committee (NWC) members of the party through consensus as a sign of victory of the party come 2023 and beyond.

The Speaker stated this while speaking with journalists in Lafia, the Nasarawa State capital.

Balarabe Abdullahi congratulated Sen. Abdullahi Adamu and his team on their victory at the national convention as he wished them a fruitful tenure.

He expressed the optimism that the newly elected chairman will deliver on his mandate considering his vast experience in politics and administration as he urged him to bring them to bear.

“On behalf of myself, principal officers and members of the Nasarawa State House of Assembly, I wish to congratulate and rejoice with Sen. Abdullahi Adamu as the National Chairman and other NWC of our great party, APC.

“The emergence of APC Chairman, Sen. Abdullahi Adamu and other officials through concensus shows that APC is a one big family that resolve it differences internally.

“The election of His Excellency, the Former Governor of Nasarawa State, Sen. Abdullahi Adamu and other National Working Committee of the party was a sign of victory to our great party in 2023 and beyond.

“Sen. Adamu and his team have the capacities and abilities to take our great party, APC to the greater height in the country,” he said.

Abdullahi advised the National Working Committee to work together and to unite APC members for the success of the party in 2023.

He assured the National Chairman of the party of their support and partnership at all times.

He also commended President Muhammadu Buhari for uniting members of the party and for taking the party to greater height in the country.

The Speaker restated his continued determination to partner with the executive arm in order to ensure speedy development of the state and the country at large.