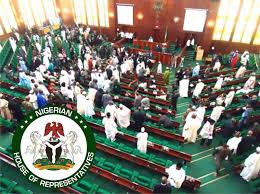 A new Bill at the House of representatives when assented to by the President is set to restrict the appointment of the Comptroller General of Customs within the Service, and make appointment of same from outside the Service illegal.
This is coming against the backdrop that the current Comptroller General came in from outside the service a situation many believe will discourage the struggle for excellence among the heirachy of the service.
The House of Representatives had on Tuesday considered and approved the report of the House of Representatives Committee on Customs and Excise, on a Bill seeking the repeal of the Customs and Excise Management Act, enacted 63 years ago.

While presenting the synopsis of the report before the Committee of the Whole, the sponsor of the Bill, and chairman House Committee on Customs and Excise, Hon. Leke Abejide, took lawmakers through the existing shortcomings militating against effective performance of the Service.

According to him,”The passage of this Bill is a step in the right direction, especially in view of the fact that the Bill is the fàirst major reform in the Nigeria Customs Service
(NCS) Legal Framework in 63 years.
The old Act has become obsolete in
today’s competitive global world and also, in effective operations of the
NCS.

“A review of the Act seeks to reposition the NCS for improved efficiency and service delivery. Full automation of the NCS with modern reality will facilitate trade, improve revenue generation and more importantly expose illegal importation of arms and ammunition into the country. All these would be made possible when this Bill becomes an Act” .
Hon Abejide pointed out notable legislative initiatives in the Bill saying it will enable the “collation of all Customs and Excise legislations into a single compendium of Customs & Excise Act to facilitate easy reference and easy knowledge driven Customs and Excise policies.”

According to him, “This Bill when it becomes an Act will position Nigeria Customs Service to be financially stable and this will enable NCS to recruit the required number of Officers they need to man our porous border stations. The Nigeria Customs Service currently have 15,349 Officers instead of 30,000 Officers needed for the Service to function optimally.
“The current 7% cost of collection from the Duties payment is not enough to pay salaries of officers, not to talk of improving the infrastructures. For this reason, this Bill provides for funding system based on 4% FOB, according to international best practice, to address funding problems and to reposition the service for improved efficiency and service delivery, as such 7% cost of collection shall cease to exist the moment this Bill becomes Law.
“Making the Act more readable to the understanding of the principal
stakeholders thereby deviating from hitherto strict legal drafting of the
aged.
“Providing stiffer punishments for offenders to act as deterrence for
serious economic crimes of Customs and Excise oriented thereby
encouraging more revenue in the area of payment of fines.
“Provision of Legislative input into the appointment of Comptroller General of Customs similar to other organisations like Inspector General of Police, Nigeria Immigration Service, and the Service
Chiefs. This is based on the economic importance and security implications the occupier connotes to the national economic and security development.
“Provision of Arbitration Panel for the purpose of dispute resolution to
reduce multiplicity of cases at the court of law relating to customs issues. A situation whereby dispute arose between the Nigeria Customs Service and a Stakeholder and is same NCS that will set up panel mainly comprising of Customs Officers to judge then justice is
far from being served
“Rejigging the Board of Customs and Excise Management with competent and result oriented technocrats for smooth and fast operation of its functions, putting round pegs in round holes.
“Provisions in line with international best practice with realistic deviation from the 1958 Act that has become obsolete in injecting combative approach to revenue and trade facilitation.
“Boosting the morale of Customs Officers with incentives introduced
to carry them along in the scheme of things from the Comptroller General down to the last employee of the Service in line with revenue generation institutions and service delivery mechanisms.
“Introduction of new Excise collectable revenue avenues in line with the recently enacted Finance Act 2021 for the smooth operation. The collection of Excise Duties on all carbonated drinks now captured in this Bill for the Nigeria Customs Service to have adequate legal
backing to function in this area”.
He added that “the aforesaid
developments injected into this Bill is sufficient to implode economic
development, facilitation of trade and greater revenue generation in tandem
with the goal and target given to the Nigeria Customs Service in view of
fiscal independence and autonomy our economy is yearning for.”
“The most innovative inclusion into this Bill is the objectives of eradicating
problems of corruption, fraud and malpractices together with inefficiencies and ineffectiveness in operation of the Service, which have hindered the
desire to contribute maximally to the economic development of the nation.
“Finally, this Bill is in tune with ICT development which is going to give the
Service the ICT demand it requires for its operations in line with international best practice. This would ensure a model that can think a thousand times faster and more efficiently than humans do,” he argued.
In agreement with the sponsor’s argument, the House upon reverting to plenary read the Bill for the third time and approved same as passed.