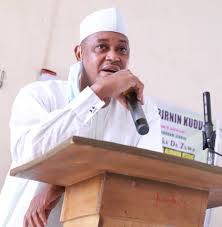 The Vice Chancellor of the newly established Federal University of Technology, Babura in Jigawa state, Professor Sabo Ibrahim BirninKudu has indicated that the university will commence academic activities with two faculties.
The two faculties according to him are faculty of engineering and the faculty of sciences.
Professor BirninKudu therefore solicited the support and assistance of the security chiefs in the state over the growing threats by the activities of bandits and kidnappers to learning in the institutions in the region (northwest).

The Vice Chancellor made the appeal when he led the management of the institution on a courtesy visit to the commissioner of police, Director of the department of the State Security Service and Commandant of Nigeria Security and Civil Defense Corps In their respective offices.

According to him “Security is paramount in the development of the institution, particularly in view of the growing threat by the activities of bandits and kidnappers as well as other social vices”.

Professor BirninKudu, said the visit became imperative in order to establish a good and harmonious relationship between the university and the Police Command.

The VC maintained that “Without peace, there could be no development, hence the desire to establish a good working relationship with the security outfits in the state”.

The Police Commissioner, Alhaji Aliyu Saleh Tafida in his response, thanked the Vice Chancellor and his team for the visit as he gave the assurance that the Police Command will do its best to provide security cover for the new institution.

He said “Be rest assured that our men and officers will give maximum support and cooperation for a smooth operation of the university.”

Also the director of State Service, Dr. Nuhu Umar, said although Jigawa State is a peaceful state, however, they will not relax in the effort to ensuring that the University remains peaceful all through.

The state Director noted that without peace nothing tangible could be achieved adding that they will not leave any stone unturned to ensure that the university operates in a peaceful atmosphere.

The Vice Chancellor was accompanied on the visits by the Registrar of the University and Secretary of the Governing Council, Hajiya Fatima Binta Mohammed, the Bursar, Alhaji Ibrahim Alhassan and the University’s Librarian Alhaji Abashe Abbas.