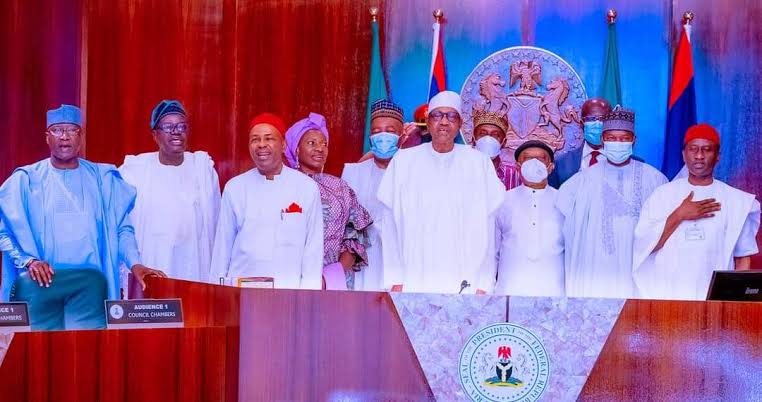 President Muhammadu Buhari on Friday, held a farewell session with 10 ministers who have resigned to contest elections

He said the vacant positions created by their resignation will be filled immediately
The valedictory session was coming on the heels of President’s recent directive to all ministers and political appointees contesting for various elective positions to resign from their appointments on or before Monday, May 16, 2022.

speaking to State House correspondents after the valedictory session Minister of Information, Lai Mohammed, stated that the president thanked the outgoing members of the cabinet for their services and in addition to wishing them success in their endeavors.

“You will recall that on Wednesday, Mr. President directed and I informed you that all ministers and other political appointees who aspire to contest for elective offices in 2023 general elections, should resign their current appointments.

“This morning, there was a valedictory service for 10 members of the Federal Council who have indicated their desire to aspire for higher offices. Nine of them were present the 10th was absent with apology.

“Mr. President used the occasion to thank the outgoing members of cabinet for their sacrifices and services. Mr. President also in addition to wishing them success in their endevour, also expressed the confidence that giving the expertise, the experience and what they must have garnered during their years in office, they like other aspirants are fully equipped to run the affairs of the state.

“Ofcourse, Mr. President also admonished the remaining members of the Cabinet that the journey is still far. And they should all redouble their efforts, be more diligent and be more committed to the success of the administration.

“At the end of which the outgoing ministers had a group photograph with Mr president and also with the chief of staff and the secretary to the government of the federation.”

“On if they all tendered their resignations, Mohammed said: “Well, Mr. President said some have and others are in the process of doing so. But he thanked everybody for their compliance.” Mohammed said.

According to Minister of Information, it is only the President who can issues waivers should anyone of them changes his or her mind to return to their positions.

“Only Mr. President can say that. I’m just sticking to the speech of Mr. President and so I don’t want to speculate what can happen and what cannot happen. But Mr. President’s speech was very clear. He thanked the outgoing ministers for their sacrifice and contribution.” He stated.

Lai Mohammed, said if former President Goodluck Jonathan, joined the ruling party, that it would be better for the APC, he said: “As for whether to President Jonathan has joined the APC, I think the party will be in a better position to know who is joining the party or not.”

On if there any information regarding the CBN governor and if he is resigning, Mohammed said the CBN Governor was in a better position to address his issue, stressing, “No. But I think he addressed you yesterday and he said you should wait for the news.”

He added that replacement or reshufflement is coming soon. According to him, the Ministers are to be replaced very soon without delay.

“I don’t know about reshufflment. He said the vacancies would be replaced very soon.” He said.

Without restructuring Nigeria will sink into oblivion, Participants at a political dialogue warn

NOA says, it has responsibility to enlighten citizens on the mandates of the 3 arms of govt